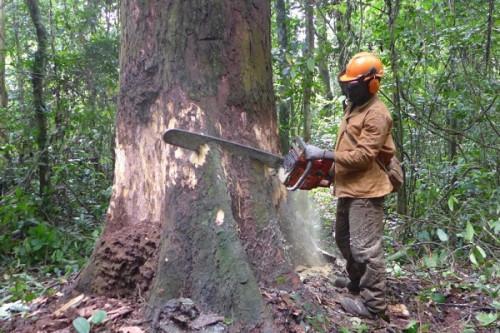 (Business in Cameroon) - Minister of Forestry and Wildlife Jules Doret Ndongo recently published a call for tender for forest operators active in the country to submit bids for the exploitation of five forest management units covering a total of 387,954 hectares of forests in the East and Centre.

Three of those management units are set aside for firms that have forest management units in the North-West and the South-West or their partners, the call for tenders stresses. The said units cover a total of 287,562 hectares, representing 74% of the forests to be conceded to operators.

Since the onset of the separatist crisis, the insecurity caused by armed groups supposedly fighting for secession has greatly affected economic activities. Faced with threats to their employees, abductions followed by ransom demands, racketeering, and vandalism, several firms (including forest operators) delocalized or simply stopped their operations.

According to Paul Tasong, the Minister Delegate to the Minister of Economy Planning and Regional Development who is overseeing the implementation of the plan for the reconstruction of the Anglophone regions, the sociopolitical crisis caused a loss of 0.8 and 0.3 growth points to the national GDP in 2019 and 2020 respectively. Between 2017 and 2020, the cumulated loss in national GDP was estimated at some XAF421.3 billion, he added.

The GICAM, the largest employers’ organization in Cameroon, estimates that since its onset, the Anglophone crisis has caused a cumulated XAF800 billion loss for companies.