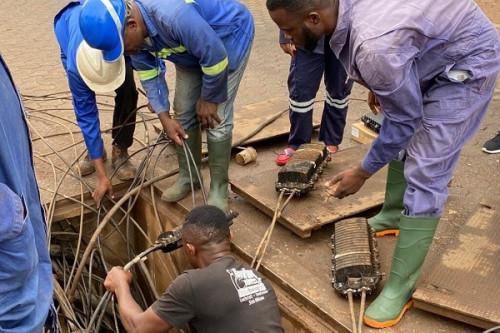 (Business in Cameroon) - The International Finance Corporation (IFC) recently issued a report on the situation of the telecoms sector in Cameroon. The document revealed that investments in the sector dropped by 78% between 2016 and 2019, despite the increase in needs. The gap is estimated at 52.6% between 2018 and 2019.

Data from regulator ART showed that telecom operators invested CFA400 billion in 2016, the highest investment since 2009. In 2017, the amount shrank to CFA305.3 billion before further declining to only CFA 84.6 billion in 2019. IFC regrets that this is happening in the context of growing needs in the sector. The institution mentioned the need to continue the deployment of optical fibers, which now represent a crucial infrastructure for the development of telecoms.

IFC found in 2020 that the “fiber gap”, which refers to areas where optical fibers are not yet deployed or not yet used, affects 14 million Cameroonians, out of a population officially estimated at around 25 million. Although the institution did not explain what causes this drastic slowdown in telecom investments, particularly from mobile operators (Orange, MTN, and Nextell), which generally provide up to 95% of overall investments, sources within the companies said they are first focusing on fully deploying optical fibers. Only the incumbent operator Camtel currently operates optical fibers in Cameroon.

An explanation could be that the operators had to slow down their investment after making significant spending in 2014, 2015, and 2016. As a reminder, Nexttel launched Cameroon’s first 3G network in 2014. In 2015, MTN and Orange renewed their telecom licenses with 3G and 4G. And in 2016, the operators extended their networks, which in 2020 covered between 79 and 85% of the population.