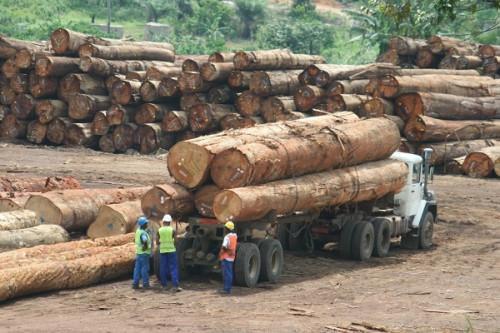 (Business in Cameroon) - In the 2022 draft budget to be reviewed by parliament during the budget session opened on November 11, Cameroon plans to tighten conditions required to export raw timber from the country. According to the presentation made on November 8, by Finance Minister Louis Paul Motazé, the document plans for an increase, from 35% to 50%, of export taxes “to encourage local wood transformation and reduce deforestation.

This means that if the provision is validated, starting from January 2022, wood exporters would pay an additional 15% customs duties to send raw timber abroad. On the other hand, wood actors who want to acquire equipment to start transforming or even boost their processing capacities locally will be fully exonerated from tax and duties on the importations of equipment and tools that can not be found on the national territory, the text indicates.

Through the two provisions mentioned above, the Cameroonian government is paving the way for an outright prohibition of the exportation of raw timber. This raw timber export prohibition was initially planned for 2022 in the CEMAC zone but it was later postponed to 2023. Officially, CEMAC countries intend to capitalize on the transitory period going from January to December 2022 to launch preliminary studies for the maturation of investment projects retained in the first phase of the raw timber export prohibition procedure.

As it appears, pending the saturation of community projects, Cameroon seems to be anticipating the prohibition by establishing incentive measures for economic operators eying the wood processing sector. The measure will boost the local wood industry, create new jobs, and increase locally added value. That measure can also help reduce the revenue shortfall recorded when some forest operators hid some of their financial transactions.

Indeed, in a report titled: “TAINTED TIMBER, TARNISHED TEMPLES: How the Cameroon-Vietnam Timber Trade Hurts the Cameroonian People and Forests,” two NGOs revealed that Vietnamese forest operators active in Cameroon illegally exported over XAF170 billion worth of raw timber (the bulk of their timber exports from Cameroon, according to the report). By hiding those commercial transactions, the operators manipulate their turnover and therefore the value of the taxes to be paid to the Cameroonian administration.

According to the national institute for statistics INS, in the first half of 2021, Cameroon generated 4% of its exports earning from raw timber. During the period, raw timber was the sixth main export earning provider for Cameroon after crude petroleum oils (39%), raw cocoa beans (13%), natural liquefied gas (9%), sawn wood (7%), and raw cotton (7%).