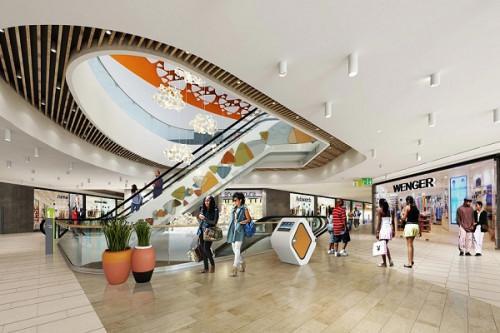 (Business in Cameroon) - On December 10, Prime Minister Joseph Dion Ngute discreetly met Cameroonian engineer Mathurin Kamdem (a former high executive with Bouygues in France and promoter of the Douala Grand Mall, which is a gigantic shopping and recreation mall located at the entrance of Douala and whose construction was completed in July 2020). According to internal sources at the prime minister’s office, Mathurin Kamdem came to the meeting with Patrice Yantho, the founder of investment constancy firm JMJ Africa (which is part of the expert team of the Douala Grand Mall project, since the inception of the said project).

During the audience, the participants discussed the inauguration of the Douala Grand Mall, scheduled for today December 17.  The said inauguration comes one month after the 160-stores futuristic mall was opened to the general public (on November 17, 2020, when the fourth Cameroonian store of French distribution group Carrefour was opened attracting about 10,000 people to the Douala Grand Mall that day).

Built by South African group Raubex, Douala Grand Mall’s occupancy rate was 62% in July 2020, and the promoters were forecasting it to rise to 70% in September 2020 and 100% by end of the year.  By September 2020, 60% of the mall’s stores were already reserved by local brands against 40% for foreign brands (which occupy the largest stores like Carrefour’s supermarket or the 5-cinema rooms multiplex managed by Nigerian company Genesis, according to Mathurin Kamdem).

The project is the result of a joint venture between the Craft group (controlled by Mathurin Kamdem) and the British group Actis (that controls Eneo). Its first phase cost about XAF50 billion. Thanks to the project, close to XAF15 billion was injected into the local economy with the purchase of various equipment and services. For the second phase (during which a 5-star hotel and an office park will be built on the same site), roughly the same amount will be injected into the local economy again.

Credible sources inform that works for the second phase (whose technical studies are underway and fundings already raised) will start in 2021. At the end of the phase, the Douala Grand Mall & Business Park (requiring a XAF80 billion investment) will emerge. According to the promoters, the business park will be able to accommodate 300,000 visitors monthly and generate 4,500 jobs.

With the Douala Grand Mall & Business Park, Mathurin Kamdem intends to fulfill his dream of transforming the Douala airport area into a modern and futuristic city like Accra, Ghana’s capital. This is not the only ambition of the dreamer who abandoned a well-rewarded position of Managing Director at Bouygues to participate in the development of his native country. Thanks to his 23-year experience in engineering, construction, and industrial development, the Cameroonian engineer has many projects for Cameroon.

Besides the second phase of the Douala Grand Mall, Mathurin Kamdem (who was one of the artisans of the infrastructures of which Equatorial Guinea is proud of nowadays) also plans to build an international airport in Kribi and implement futuristic real estate projects in Yaoundé and Douala.

The engineer participated in the implementation of hotels and luxury properties projects (like the Four Season Georges V and Park Hyatt in Paris) in Europe. He also oversaw the construction of stadiums, golf courses, bridges, and even renovated presidential residences in Equatorial Guinea. Also, he intends to build a grand mall in Yaoundé as he is doing in Douala.