Toll collectors fired for fraud on the Douala-Bangui corridor 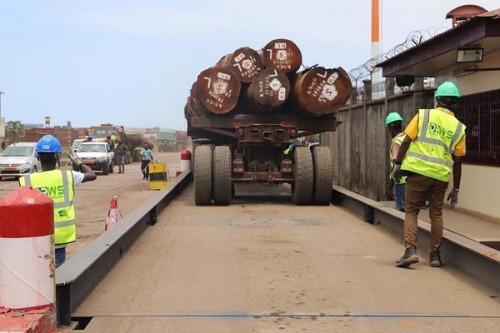 (Business in Cameroon) - The Minister of Public Works (Mintp), Emmanuel Nganou Djoumessi, signed a decision on May 16 to dismiss some staff on duty at the Mekong toll booth on the Akonolinga road, Douala-Bangui corridor.

"Without prejudice to administrative sanctions, the following staff in service at the Mekong toll booth are dismissed for serious breaches of ethics: Lingock Lingock Mathieu Christophe (station manager); Awenti Armstrong Awenti (team leader No. 1); Byang Pambe Paning (team leader No. 3)," says the ministerial decision. A source revealed the toll collectors got fired because they were ripping off transporters. "They used faulty instruments that inflated the actual weight of the vehicles," the source said, explaining that “the station was temporarily closed for technical reasons, and its equipment is still on maintenance. But the agents opened it to charge false fees to the transporters," thus causing more hassle on this corridor, already criticized for its high number of road controls.

However, some transporters were aware of the situation and alerted relevant authorities, who reacted swiftly. As a reminder, the Mekong toll station has been closed since March 30, 2022, because of its defective equipment.

According to Cameroon Customs, the Douala-Bangui corridor, which carries about CFA55 billion worth of goods each year,  is the main supply route for the Central African Republic capital.