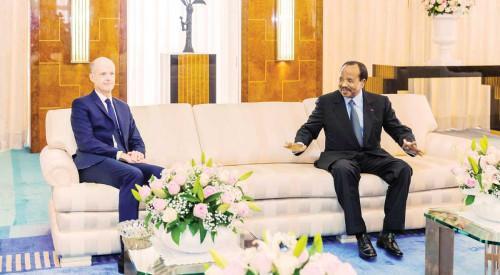 (Business in Cameroon) - Cameroon is currently negotiating another temporary suspension of the payment of its debts to France, under the Debt Service Suspension Initiative (DSSI) decided in 2020 by the G20 countries and the Paris Club. This was hinted at by the French ambassador to Cameroon, Christophe Guilhou (photo, left), on March 16, 2021, in Yaoundé, during the 14th session of the Steering and Monitoring Committee of the Debt Reduction-Development Contracts (C2D), signed by Cameroon in 2006, 2011, and 2016.

"We are all aware that this serious health and economic crisis (ed. note: COVID-19) is not over yet. To tackle it, Cameroon applied for Debt Service Suspension Initiative. As a member of the Paris Club and the G20, France agreed to this request, and an agreement between our two countries on the temporary suspension of the 2020 debt payments was recently signed. Discussions are underway regarding the 2021 deadlines," the French diplomat revealed.

The volume of the debt Cameroon was supposed to repay France for the 2021 fiscal year has not been published. But, we know that between May 1 and December 31, 2020, that debt was XAF72.6 billion, representing the capital loss marked in the C2D account due to that suspension (according to the C2D contracts, beneficiary countries must first repay the debts owed to Franc, which will immediately grant the corresponding amounts to sustainable development and hunger relief programs in the said countries).

If the negotiations are successful and assuming that the volume of the debt Cameroon was to repay to France is equal to the May 1-December 31, 2020 volume, France would have relieved Cameroon of a financial burden of over XAF145 billion within two years.

Truly the initiative eased pressures on the state’s cash flow but, it also undermined the proper execution of programs and projects financed by the C2D contracts.

"This moratorium, which includes the payments due under the C2D, will have significant impacts on the cash available for the scheme. This ordeal comes at a pivotal time for the C2D. After 15 years of investments and efforts to benefit the population, we are aiming to not only continue the operations but also to fulfill our maturity ambitions. Cash flow shortfalls will undeniably complicate this task, and will require an urgent adoption of appropriate solutions to deal with this situation," Christophe Guilhou explained.

During the March 16, 2021, meeting, Cameroon's Minister of Finance, Louis Paul Motazé, expressed the same concerns. One of the solutions he suggested to the cashflow difficulties the C2D programs will face in 2021 and beyond (ed. note: if the 2021 repayments are suspended), is that the public treasury will fund C2D projects and programs if not all but part of them. This will imply a further rise in public debt since the security spendings and the coronavirus pandemic are already pressuring public finances.

The French ambassador to Cameroon advocates a concerted search for solutions. "A cash shortfall would slow down or even cause the suspension of C2D projects. If the moratorium is extended to 2021, compressing cash flow needs will not be a sustainable solution. Therefore, to prevent such outcome, Cameroon and France need to engage in high-level joint reflection to decide on budgetary, financial, or fiscal mechanisms to reduce cash flow and optimize available resources," he suggested. For the French diplomat, this issue must be included in the agenda of the C2D mid-term review, scheduled "before the end of the H1-2021", he added.

Let’s note that according to Finance Minister Louis Paul Motaze, between 2006 (when the first C2D contract was signed) and 2025 (end of the 3rd C2D), the overall debt to be restructured by France for Cameroon is XAF967.4 billion. As such, Cameroon will be the largest beneficiary of that facility intended to relieve economically fragile countries.