Delayed by the Covid-19 and technical constraints, Radisson Blu Douala will open in Q3-2023 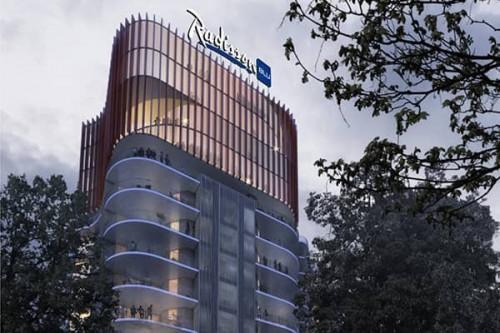 (Business in Cameroon) - Radisson Blu Douala initially planned to be opened in the first quarter of 2021, will finally be launched in Q1-2023.

"The Covid-19 pandemic has impacted the entire chain of this hotel [construction] project," said Erwan Garnier, development manager for Radisson international Central and West Africa, in an interview published in this month’s issue of the Business in Cameroon magazine.

Apart from the impacts of the coronavirus, the project was also delayed by some technical constraints. “(..) This project includes converting a building owned by the national social security fund (CNPS in French). Upon starting work, the developer realized that the building had to be reinforced, especially since the project involved turning a residential building into a hotel. Therefore, the whole building had to be fully redesigned and several floors had to be added, a bar and a pool also. For this to be done, the building’s structures needed reinforcing. These works helped create 180 rooms and apartments. Briefly put, the project was delayed due to technical reasons,” explained M. Garnier

Radisson Blu Douala is the outcome of a public-private partnership between Financia Capital and Cameroon’s National Social Security Fund (CNPS). It will cost XAF25 billion, according to estimates contained in the agreement with the Investment Promotion Agency (API).

Thanks to that agreement, the project will benefit from tax and customs incentives provided by the 2013 law (revised in 2017) on private investments in Cameroon.

It will be the first 5-star hotel to be built in Douala and boost Cameroon’s offer in the high-standing hotel segment.

“(..)This is just our first step into Douala’s hotel market because we plan on adding more of our group’s brands. In short, both in Yaoundé and Douala, we think that it is possible to have several brands, several positions...,” Erwan Garnier adds.