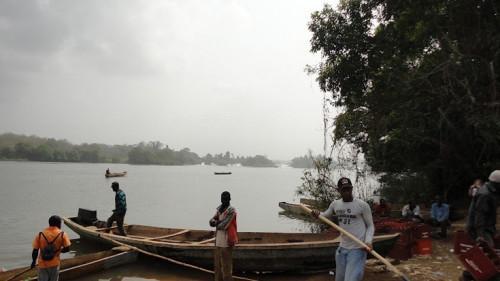 (Business in Cameroon) - On April 15, 2021, the Minister of Livestock, Fisheries and Animal Industries, Dr. Taiga, held a consultation meeting with Théodore Nsangou, General Manager of state-owned electricity distribution company Electricity Development Corporation (EDC). According to reliable sources, this meeting aimed to discuss the development of industrial fishing along the Lom Pangar dam to meet the country’s needs and reduce imports.

The sources explain that the development of fishing activities in the 6 billion cubic waters of the Lom Pangar dam is just a first step because the same project will later be implemented in the waters of all the dams in operation in the country. Officially, since its impoundment in 2015, over 6,000 fishermen have been active in the waters of the Lom Pangar Dam. Those fishermen mostly supply fish distribution networks outside the country while Cameroon still imports over XAF100 billion worth of frozen fish every year.

The project currently planned will therefore boost local fish production, and contribute to the implementation of Cameroon’s import-substitution policy. The country started implementing the policy this year to improve the local industry and reduce its dependence on foreign products, food products notably.

According to the Minister of Livestock, Fisheries, and Animal Industries, Cameroon produced close to 335,000 tons of fish in 2019. That year, the demand was 600,000 tons, representing an over 160,000 tons gap. The country now intends to fill such gaps by developing industrial fishing along the various dams in operation (Lom Pangar, Bamendji, Mbakaou, etc.).