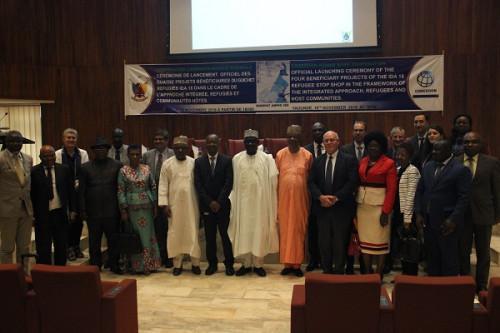 (Business in Cameroon) - On November 19, 2019, in Yaoundé, four projects funded by the “the IDA18 regional sub-window for refugees and host communities” were officially launched.

According to Abdoulaye Seck, Country Director of World Bank operations in Cameroon, the total financing amounts to $130 million (a little over XAF77 billion), including $86 million (Over XAF51 billion).

“It is important to recall here that Cameroon was the first African country to benefit from the IDA 18 special refugee window. This is in recognition of the country's generosity and its long tradition of solidarity and hospitality towards displaced people,”  Abdoulaye Seck said.

Specifically, in the framework of the projects launched, “basic services such as education, health and nutrition will be provided to populations, while cash transfers and income-generating activities for poor and vulnerable households will enable them to bear the direct and indirect costs associated with these services,” the country director explained.

“To this end, the four projects will have to be implemented together at all levels, especially at the communal level, where the same organizations and community relays can facilitate different activities. The objective is that the sum of the efforts should be greater than the fragmented efforts, and this, for a maximum impact on the communes and host populations,” he indicated.