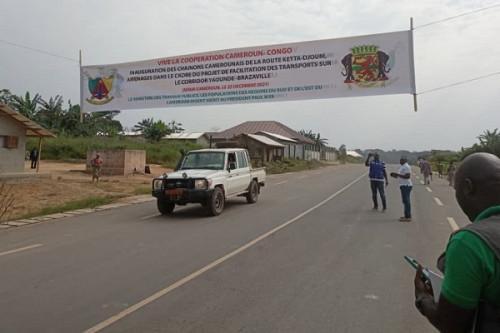 Thanks to those sections, travelers coming from Yaoundé to Ntam, the Eastern border town with Congo, can now make the whole journey within seven hours. This is a significant reduction in traveling time. “Previously, we would spend four days on our way from Yaoundé to Ntam. After Sangmelina, the road was in a terrible condition, starting from Djoum. It was worse during the rainy seasons. Cars would bog down and we would be obliged to push them to move ahead. Doing so, we spend like one day just passing a road section. Sometimes, we would come across a fallen truck loaded with oranges. In that case, one or two days were needed to clear the road. Now, within hours, we can go from Yaoundé to Ntam, at the Congolese border. It’s like a dream,” explains Louis Roger Ndengue, a resident and transporter.

During the inauguration ceremony, Joseph Nguessan, the African Development Bank (AfDB) representative for the Central African region, also had an anecdote to tell. “I worked as an expert on this project. At one time, I took the itinerary to get a feel of the real conditions. This road you are seeing now was just a track! I’m now proud to see two CEMAC capitals connected by road. It is the AfDB’s ambition to see such initiatives implemented in more countries in Central Africa,” he said.

The inauguration ceremony was attended by Cameroon’s Minister of Transports Jean Ernest Massena Ngallé Bibehe, his peer of the Civil Service Joseph LE, the divisional officer of Sangha (Congo), Gilbert Mouanda-Mouanda, and the project manager, Minister of Public Works Emmanuel Nganou Djoumessi. The latter praised the quality of the infrastructures, which is compliant with standards, having weighing stations and rest areas for transporters. He invited residents to make good use of the infrastructure and produce more agricultural products since they can now send them to neighboring Congo within hours.

“Also, by opening this zone, the road will contribute to economic development by facilitating the transport of agricultural products, movements between Djoum and Mintom, and the circulation of trailers coming from Congo-Brazzaville to unload their goods at the Port of Douala,” the Minister of Transports praised.

According to updated figures on the cost of the Cameroonian sections of the Sangmélima-Ouesso corridor, the works cost XAF205.1 billion. The funds were provided by various backers like the Arab Bank for Economic Development in Africa, the Islamic Development Bank, the AfDB, the Saudi Fund for Development, the Kuwait Fund, and the two beneficiary countries (Congo and Cameroon).