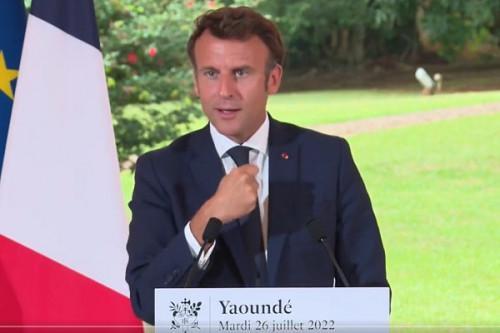 (Business in Cameroon) - While visiting Cameroon yesterday July 26, the French President, Emmanuel Macron, expressed his ambition to win back influence in the country.

He presented the roadmap for his new term to boost economic cooperation with his partner, especially in the context he describes as "increased competition." "The AFD (French Development Agency) has not stopped its commitment to Cameroon (€2 billion, or more than CFA1.3 trillion invested over the past decade, ed). Cameroon is one of the countries where we are deployed the most and have the most ambitions. The country has grown tremendously. Consequently, other countries and companies have entered the market, and (...) it seems they have outperformed us,” Emmanuel Macron said.

To restore the economic image of France in Cameroon, where about 200 French companies operate, Emmanuel Macron wants his country to make more than mere traditional investments such as "major infrastructure and commodities.” The French head of state is now betting on diversifying the investment offer, with a focus on specific sectors.

"We invest in the agricultural sector but I want us to do more. I want us to be active in the cultural and creative industries, sports, digital, entrepreneurship… I think there is a huge challenge in Cameroon, as in other African countries, which is to achieve the transition from the informal to the formal economy. To do this, we must have partnerships with SMEs, and know how to structure financing ... These are some of the topics on which I hope we can reinvest the relationship to give it fresh air, not just in terms of volume but also in terms of quality," said the French leader.

According to him, the new economic approach that France intends to deploy in Cameroon cannot be effective in an environment plagued by corruption and opacity in the award of contracts. Emmanuel Macron called on authorities from the two countries to work "together on good governance reforms, so that all these contracts are done in transparency, and that we have an effective fight against corruption.”

"Competition is good, but when done in a corrupt environment it’s surely not,” he stressed. As a reminder, according to official data, over the past 3 decades, French companies have lost 30% of the market share in Cameroon. "The market share of French companies in Cameroon has dropped from 40% in the 1990s to 10% today," Christophe Guilhou, the French ambassador to Cameroon, said last year.

Many observers believe that France is losing ground in Cameroon to China's influence. "Between 2000 and 2014, Cameroon has captured CFA2,750 billion of foreign direct investment (FDI), including CFA1,850 billion from China. This represents about 67% of FDI entering Cameroon (...) The other FDI came from countries such as France, the United States, and Nigeria," according to a document from the Presidency of the Republic of Cameroon, which cites data from the United Nations Conference on Trade and Development (UNCTAD).

Since the early 2000s, China has won virtually all infrastructure contracts in Cameroon. This predominance has increased tenfold since 2012, with the launch of first-generation structural projects (bridges, roads, dams, etc.). Chinese projects in Cameroon are mainly backed by Eximbank China, the Chinese public bank. The Chinese companies active in the country include CCCC, CWE, CHEC, and Sinohydro in the infrastructure segment and Huawei and ZTE in telecoms.

In the trade segment, China is also leading. With 21.5% of the market share, it remains the main export customer of Cameroon in 2020, according to data compiled by the National Institute of Statistics (INS). Better, during the year under review, the Asian country, which occupies this place since 2013, gained three percentage points compared to 2019. INS also indicated that China captured 17.5% of Cameroon's import spending in 2020, two times more than France (8.7%), three times more than Belgium (5.6%) and India (5%), and four times more than the United States (4.4%).