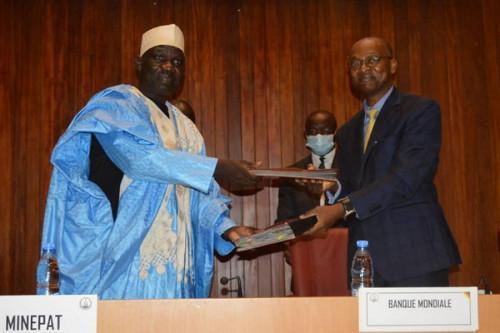 (Business in Cameroon) - Currently, the World Bank’s project portfolio in Cameroon consists of 14 active projects totaling US$1583.2 million (nearly XAF950 billion). The figures were disclosed in Yaoundé, yesterday, January 21, by the Minister of Economy (MINEPAT) Alamine Ousmane Mey during the signature of a convention for the development of the Lake Chad region.

According to the MINEPAT, 66% of the funds for that portfolio is made up of concessional loans from the International Development Association (IDA) window, the World Bank’s branch that helps the poorest countries; 32% was raised from the International Bank for Reconstruction and Development (IBRD) window, which is the World Bank’s non-concessional window, while the remaining 2% were raised through grants.

The official further revealed that apart from the funds provided for development projects, the World Bank has also provided Cameroon US$400 million (over XAF200 billion) as budget support.

Let’s note that according to the International Monetary Fund (IMF), a loan is said to be concessional if its grant element (the difference between the loan's nominal value and the sum of the discounted future debt-service payments to be made by the borrower expressed as a percentage of the loan's face value) is greater than or equal to 35%. This type of loan is encouraged by the IMF because it is considered less expensive, but is viewed with suspicion by sovereignists because of the conditions imposed for its obtention.