National dialogue: The AU, la Francophonie, and the Commonwealth inquire about the implementation of recommendations 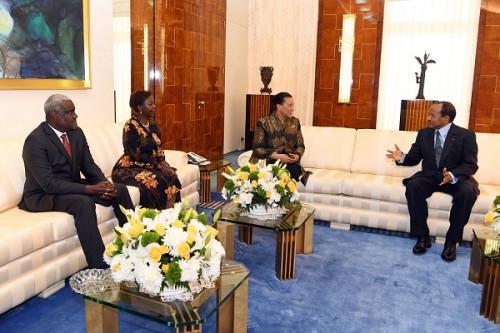 (Business in Cameroon) - Paul Biya, President of Cameroon, received on November 27, in Yaoundé, a joint mission of three international organizations, led respectively by the President of the African Union Commission Moussa Faki Mahamat, the Secretary-General of International Organisation of La Francophonie (OIF) Louise Mushikiwabo and the Secretary-General of the Commonwealth Patricia Scotland.

According to the Presidency, this mission came to inquire about developments of the situation in the English-speaking regions (North-West and South-West) and on the implementation of the recommendations of the National Dialogue held from September 30 to October 4, 2019. “Overall, it appears from their interventions that Cameroon can count on the constant support and accompaniment of the African Union, the Francophonie, and the Commonwealth in its efforts to resolve the crisis in the North-West and South-West,” the Presidency reports.

“We believe that we have an obligation to contribute modestly through advice, interventions in mediation activities or on technical subjects such as bilingualism and multiculturalism,” said Louise Mushikiwabo. Patricia Scotland, for her part, said that the Commonwealth is committed to doing everything possible to support the ongoing peace process initiated through National Dialogue. “The President of the Republic has once again expressed his willingness to engage in dialogue and appeasement,” the president of the African Union Commission added.

It has been almost three years since a socio-political crisis broke out in northwestern and southwestern Cameroon. The said crisis began with corporate demands from lawyers and teachers but turned into violent separatist claims with armed groups spreading death and desolation.

According to the United Nations High Commissioner for Refugees, 21,291 Cameroonians fled violence and fights between secessionists and the army, towards Nigeria. The NGO International Crisis estimates that about 2000 people died after 20 months of fighting. The UNICEF, on its part, indicates that the widespread insecurity has forced more than 4,400 schools to close in the English-speaking regions of the country.