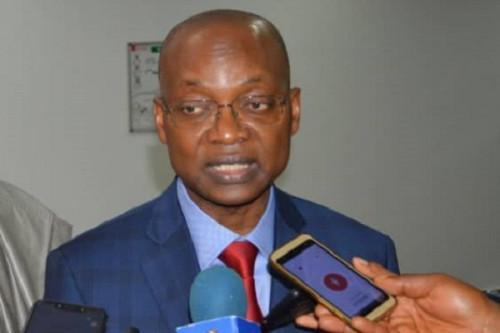 (Business in Cameroon) - By the end of the 2021 fiscal year, less than 20% of the loan proceeds of the World Bank’s project portfolio in Cameroon will be disbursed. This is the estimate presented by Abdoulaye Seck (Photo), World Bank’s country director for Cameroon, at the launch of the joint review of Cameroonian projects financed by the World Bank on March 24, 2021, in Yaoundé.

"Currently, the disbursement rate for the 2021 fiscal year is 7%. It will probably not exceed 12% by the end of the fiscal year in June while the expectation is to exceed a rate of 20%.  With the deadline for the 2035 Vision getting closer as well as the considerable needs of the population and the economy, it is difficult to understand, even unacceptable that the resources available for this purpose are not fully exploited,"  Abdoulaye Seck commented.

The executive explained that the poor disbursement will be detrimental to the project. For instance, he indicated, the development objectives of the Mining Sector Capacity Building Project (Precasem) could be compromised if key activity decisions are not taken.

He added that currently, seven problem projects are representing 57% of the value of the World Bank’s project portfolio in Cameroon. However, for some of them (like PDVIR, for the development of inclusive and resilient cities, PERACE for rural electrification, and the one aimed at reforming the electricity sector approved respectively in August 2017, December 2018, and December 2016), the cumulative disbursements range between 4% and 9%.

Another example that demonstrates how detrimental a poor disbursement rate could be is the Emergency COVID-19 Response program approved in September 2020. Till now, however, it is not effective even when it is due to close in September 2022.

According to Abdoulaye Seck, several reasons can explain the poor disbursement rate. They are institutional, administrative, and operational reasons. For instance, the delay between the approval of the fundings and the ratification of the funding agreement has risen from 4.25 months in 2016 to over 18 months in 2019.

That over 4-fold increase in those delays could be due to the project maturation decree signed in 2018. In that regard, the executive commented that the country should finetune the rules.

Also, "procurement times are inexplicably long despite the provisions, which are favorable for project management units, namely special and dedicated procurement boards. For some infrastructure projects, the contracting period is 18 months on average to hire a consultant and 24 months to sign work contracts," Abdoulaye Seck denounced.

To date, the volume of World Bank commitments in Cameroon is US$2.54 billion for 20 projects, including 3 regional projects. This portfolio is part of the 2030 National Development Strategy recently adopted by the country. It is constituted of infrastructure (44%, three-fourth of which are in the energy sector), health, education, and social protection (25%), rural development (16%) as well as inclusion and good governance (14%) projects.