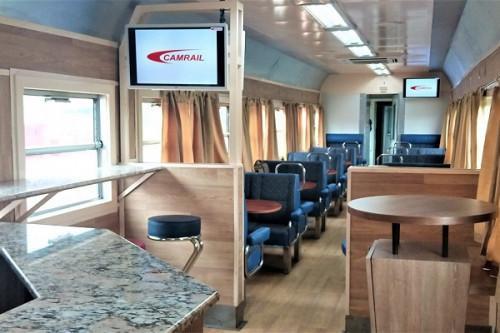 (Business in Cameroon) - On July 1, 2021, the Douala-Yaoundé express train will officially resume operations with a maiden trip from the Bessengué central station. This new route will last longer (four hours and forty-five minutes against three hours and thirty minutes in the past) due to the five intermediate stops (Edéa, Messondo, Eséka, Makak, and Ngoumou) created. Also, the new fares are higher.

According to the new price grid the government transmitted to CAMRAIL, through the Ministry of Transport, first-class passage (with high service quality and access to the bar and the restaurant) is now XAF10,000 against XAF9,000 in the past. Premium class passengers will now pay XAF8,000 for their tickets, against XAF6,000 in the past. In short, the fares are up by XAF1,000 to 2,000.

The general public is already expressing its indignation towards that price grid. “This is a strategic miscalculation. After the Eseka accident (ed. note: in October 2016), which forced the suspension of that express train, it would have been better to resume the route with attractive fares, that are lower than the previous ones,”  a marketer indicates. “Now, the most affordable transport means in the world has become more expensive than bus fares in Cameroon,” a Facebook user, Stuart Goukem, wrote as a comment under the price grid posted by CAMRAIL.

“I would rather take the VIP ticket of Finex (an intercity transport company) at XAF6,000. There are no stops and the comfort is guaranteed…,” commented Toumy Elame, another Facebook user.

For over a decade now, intercity transport companies have been offering VIP Douala-Yaoundé transport services in air-conditioned buses. Their fares are usually between XAF6,000 and 10,000, which are more competitive than the price grid posted by CAMRAIL even if the express train makes stops in downtown Douala, helping users avoid the jams usually observed at the entrance of the economic capital.

According to the concession agreement between Cameroon and Camrail, the company manages the freight and the investments required while the country manages passenger transport and the related investments.