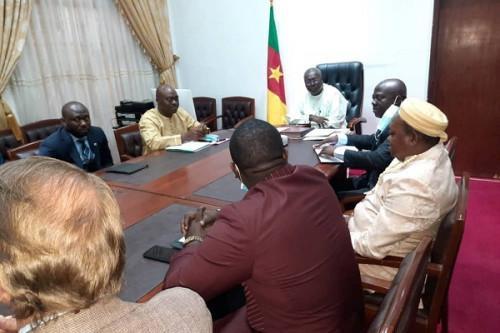 (Business in Cameroon) - On August 25, 2021, in Yaoundé, Minister of Livestock, Fisheries, and Animal Industries Dr. Taïga granted an audience to representatives of MAVECAM, a Cameroonian firm active in the fish farming industry.

During the audience, MAVECAM expressed its ambition to produce three million Tilapia fingerlings, two million catfish fries as well as 100,000 channel catfishes to reduce the fish products deficit in Cameroon. The firm also intends to produce two million tons of catfish, three million tons of tilapia, 50 tons of shrimps yearly and build an animal food production plant able to produce 30 tons of food hourly. The estimated cost of this project is US$12 million or about XAF12.28 billion. It will generate 300 direct and 1,000 indirect jobs in all the fish farming value chains in Cameroon.

The firm informs that the project will be implemented in the Wouri, Moungo, and Ocean but it requested the government’s support, through tax incentives, to successfully fulfill its ambition. "Dr. Taïga assured his guests about the government’s support and also reminded them of some support schemes like customs incentives for the acquisition of agribusiness equipment VAT waivers…" we learn.

MAVECAM was selected after a recent call for expression of interest issued by the government to encourage private investors to develop commercial fish-farming activities in Cameroon.  Indeed, Cameroon spends an average of XAF100 billion to import frozen fish yearly, according to the Ministry of Livestock. These imports seriously affect its trade balance but it helps fill the over 160,000 tons gap between the local production (335,000 tons) and demand, which is 500,000 tons yearly according to the government.