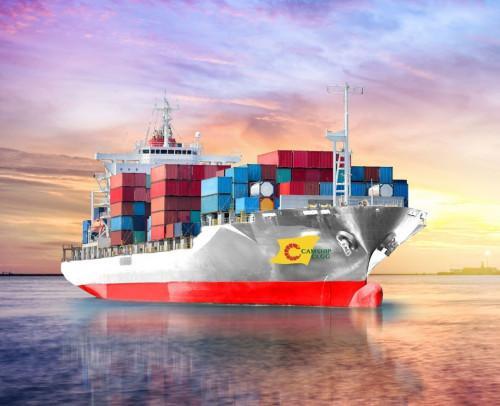 (Business in Cameroon) - On November 3, 2020, the first container ship of the Cameroonian company Camship-CLGG berthed off the coasts of Mboro, home to the deep seaport of Kribi, in southern Cameroon. According to official sources, the 600 TEU ship was thus performing the inaugural trip of the weekly Kribi-Douala cabotage line recently launched by the local company.

"Cabotage is the transport of goods or passengers between two ports in the same region in a given country. Camship-CLGG chose to launch a cabotage service for containerized goods between the ports of Kribi and Douala, at the constant request of our importing and exporting clients, and even major shipping lines. Road transport was no longer sufficient first because of volume issues (we could not transport many containers per trip) and secondly because of the security (roads have become less secure due to the rising number of vehicles and trucks). There is also the issue of costs, which are not always affordable when it comes to road transportation,” explains Angélique Béatrice Touenguene, Assistant General Manager of Camship-CLGG.

According to the operations schedule, every Tuesday, a ship will depart from the container terminal of the deep seaport of Kribi. Another ship will depart every Saturday from the Port of Douala, which is currently the main gateway for goods entering the country.

Camship-CLGG is a merger between Camship (Cameroon Shipping Lines - the state-owned shipping company that was privatized in 1997) and Consignation et logistique du Golfe de Guinée (CLGG).

"Cameroon Shipping Lines chose the trade name CLGG for port trades during the economic crisis that lasted until 2007. Camship-CLGG is now the trade name chosen to mark the return of the state-owned shipping line in the port industry. By reviving the company, we are returning to our core business within the maritime transport industry. We are also launching a service that was inexistent: cabotage of containerized goods between the ports of Kribi-Mboro and Douala-Bonabéri," says Georges Njoya, the Director-General of Camship-CLGG.

In addition to helping avoid the transportation of goods via the road network, cabotage (which has been highly expected since the start of operations at the deep seaport of Kribi in early 2018) allows large vessels that are unable to access the port of Douala (because of the low draught of the inland waterway) to unload goods in Kribi. These goods will then be transported to Douala through the cabotage service.

Port authorities intend to extend the service to the Port of Limbé, in the Southwest. To this end, Patrice Melom, Managing Director of the Port Authority of Kribi (PAK), and his counterpart Cyrus Ngo'o of the Port Authority of Douala (PAD) reached a joint decision on 24 August 2020. This decision was aimed at reorganizing the project team “whose objective is to coordinate and optimize the actions carried out for the implementation of a maritime cabotage service between the ports of Kribi, Douala, and Limbé,” the official announcement indicated.