Camair-Co staff threaten to go on strike from May 2, 2019 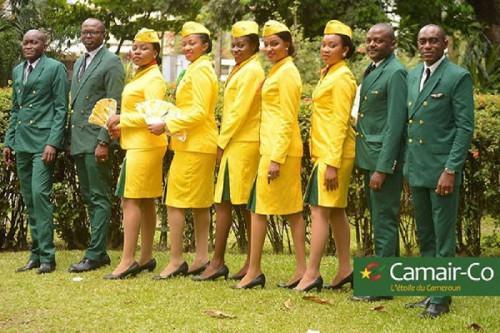 (Business in Cameroon) - Cameroon’s national airline union informed, on April 24, the Managing Director of Cameroon Airlines Corporation (Camair-Co), Ernest Dikoum, of their intention to go on strike. “After a member meeting, the group of air transportation unions represented at Camair-Co is giving notice of a strike of eight working days to the top management of Camair-Co.”

Reasons evoked by the unions include “impoverishment of employees since the company owes them three months’ salary arrears (February, March and April 2019); non-reaction of decision-making and managerial bodies though the company is falling into disrepair; a quasi-suspension of operation due to the non-renewal of Air Operator's Certificates of three quarters of the fleet because of financial strains; gradually narrowing of customer base due to uncertainty of operation; degradation of an already inadequate and substandard in-flight service fueling passengers’ anger and increasing work difficulties for crew members on board; non-existence of cargo transportation segment which is a huge source of revenue.”

They said the company has no long-term vision or project that clearly provides insight on its future. Employees also denounce “the drastic diminution in the number of pilots within the company while they are already understaffed and very rare on the market; resignation of executives who were offered top-notch and expensive training at the expense of taxpayers; total exclusion of Camair-Co from Hajj operations for two years in total disregard of the main purpose set out in Article 3 of the Presidential Decree of 11 September 2006 establishing Camair-Co; non-payment of CNPS contributions, depriving pensioners of access to social benefits, etc.”

Because of all these dissatisfactions, the airline unions are now threatening to strike starting from May 2, 2019 at 6am, Cameroon time. They say they will resume work only after the immediate payment of the 3 months' salary arrears; the rehabilitation of the company's fleet (Boeing 767, Boeing 737, MA-60); the payment of premiums for occupational medicine, property and casualty insurance for crew members and health insurance for all; the rationalization of human resources management; the resolution of any other social, technical, regulatory and/or administrative problems that may arise during negotiations.

As a reminder, Camair-Co has been going through tough times for several months. Almost the entire fleet (six aircraft) is out of order and as a result the company only generated XAF1.4 billion in revenues in January 2019 while monthly average in 2018 was XAF2.4 billion.

Created in 2011, this public airline has almost always been a loss maker for eight years. Since it was created it has faced severe management troubles and has already had 5 Managing Directors. In 2016, the company was proposed a recovery plan by US firm Boeing Consulting but is struggling to implement it.