Cameroon: in the north, breeders are selling off cattle to pay ransoms or protect themselves from kidnappers 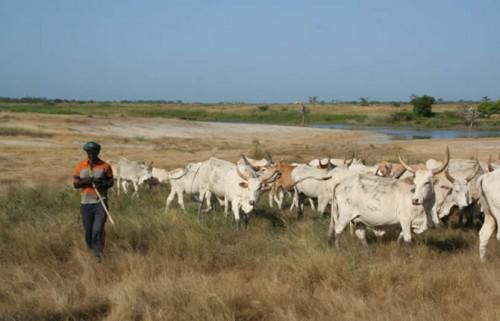 (Business in Cameroon) - In addition to attacks from the Nigerian Islamist sect Boko Haram in the Far North of Cameroon, the three northern regions of the country are also facing the problem of kidnappers, who generally abduct members of the breeders’ families and demand ransoms for their freedom.

Because of this phenomenon, the regional thrice-weekly newspaper L’Œil du Sahel, cattle prices have sensibly decreased, by up to 50% on some cattle markets in Cameroon’s northern regions.

Indeed, we learn, to be able to pay the ransoms, many breeders “are forced to sell off their cattle to be able to pay the different ransoms which the abductors demand in exchange for the hostages’ freedom. In this case, a cow which was worth FCfa 350,000 can be sold at FCfa 200,000 or even FCfa 150,000”, reveals a bankrupt livestock farmer cited by the newspaper. Others, we learn, to prevent attracting the attention of the kidnappers, also get rid of their herds, by selling them for next to nothing.

Incidentally, the situation in which Cameroonian livestock farmers in the northern regions find themselves is not the only explanation to cattle prices dropping. One of the main reasons mentioned by the operators in the breeding sector is the slump in the exchanges with neighbouring countries such as the Central African Republic or Nigeria, respectively due to the insecurity generated at the borders by former Seleka rebels and Boko Haram Islamists.

This decline in exchanges led to an abundance in the offer on the local market, thereby resulting in dropping prices. On the Ngong market, for example, presented as one the largest cattle markets in the Northern region, as revealed to L’Œil du Sahel by breeders, barely 200 bulls are now being sold per market, against 1,000 before.