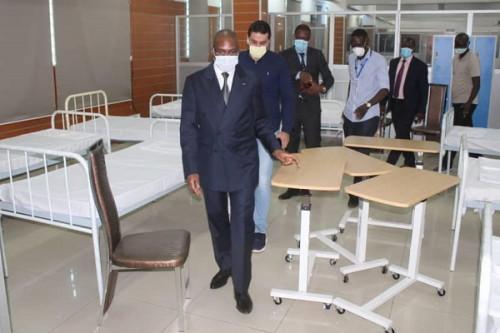 (Business in Cameroon) - On November 16, 2021, the audit report on the use of the coronavirus response fund was officially published. The report was “adopted (..) following the deliberation in chambers on  Friday  04  June  2021,  on the report of  Mr.  Théodore MBENOUN,  Division  President,” it reads. So it was already ready when its presentation before the parliament was unexpectedly canceled on June 25, 2021.  The 171-page document confirms the malpractice accusations of a preliminary report that was leaked on social media in May 2021. It also adds accusations like favoritism,  conflicts of interest, and several rule violations.

“(...) the company in charge of importing 1,400,000 tests was inexperienced and over billed the sum of CFAF 15,374,000,000 in 2020, with the approval of MINSANTE [Ministry of Public Health] officials  (...) The  Audit  Bench  notes  that  these  sums  benefited  the  two  entities,  MEDILINE MEDICAL  CAMEROON  SA  and  the  intermediary  MODA  HOLDING  HONG  KONG, which  appear  to  be  closely  linked,” the report reveals.  According to documents from the Bank of Central African States (Beac), MODA  HOLDING  HONG  KONG, which is controlled by Cameroonian businessman Mohamadou Dabo, collected payments even though it was not the one to supply the tests.

The report points out that although he was not a signatory party for the signature of contracts for the acquisition of coronavirus scientists, given the amounts involved, there is no way the purchases would have been overbilled without the Minister of Public Health knowing about it.

Moreover, BEAC documents indicate that Minister Manaouda Malachie personally contacted the central bank at least once, in a bid to speed up fund transfer to Moda Holding Hong Kong for the supply of overpriced Covid-19 tests.

Drugs imported despite authorization to produce them locally

“In  fact,  the  IMPM [Institute of Medical Research and Studies of Medicinal Plants ]  was  negotiating  with  an  importer  to  buy hydroxychloroquine  and  azithromycin  tablets  from  India  several  weeks  before  the decision  of  the  Minister  of  State,  Secretary  General  of  the  Presidency  of  the  Republic, requesting  MINSANTE  to  start  manufacturing  these  drugs  locally,” the report reads

To support its statement, the report cites a letter sent on March 19, 2020, by freight forwarder Incredible India Import & Export, to the Director-General of IMPM, Prof. Jean Louis Essame Oyono. The letter was reporting the delivery of hydroxychloroquine and azithromycin as well as inputs serving for the production of those drugs.

"Thanks  to  the personal  intervention  of  Indian  authorities  and  taking  into  account  the  strong bilateral  ties  of  friendship  between  both  countries,  the  Indian  laboratories  that manufacture  the  afore-mentioned  products  readily  agreed  to  place  Cameroon  on their  priority  list  of  beneficiaries.  We  should  therefore  expect  delivery  of  these products  within  a  reasonable  timeframe,” the said letter informed.

For the auditors, although the sum was paid, it was not canceled in MINSANTE’s bank ledger. So, the audit bench concludes that “if  the  transfer  is  not  recorded  in  the  MINSANTE  bank  ledger,  there  is  a  risk  that  the sum  of  CFAF  288,000,000  will  be  appropriated  by  private  individuals (…) In  view  of  these  findings,  the  Audit  Bench  notes  the  lack  of  transparency Entertained  by  the  Minister  of  Territorial  Administration [ Paul Atanga Nji] and  the  Minister  of  Public Health [Manaouda Malachie]  in  the  management  of  this  transaction,  whereas  there  is  a  risk  of misappropriation  of  this  sum  for  private  interests.”

CFAF536 million worth of drugs missing

“No  information  on  the  management  of  the  stocks  of  these  medicines  was provided  to  the  Audit  Bench.  These  medicines  were  not  taken  over  by  the  stores accountant  and  nobody  at  MINSANTE  was  able  to  say  where  they  were  stored.  In addition,  no  information  relating  to  the  payments  of  these  three  contracts,  for  CFAF 536,443,636,  is  recorded  neither  in  the  accounts  of  the  Specialized  Paymaster  at MINSANTE,  nor  in  the  statement  of  account  of  cash  payments  of  MINSANTE  for  2020,” the report explains before concluding that  “In  view  of  these  elements,  and  in  particular  the  inability  of  MINSANTE  officials to  identify  the  storage  location,  the  Audit  Bench  considers  it  highly  likely  that  either these  medicines  were  diverted  to  private  individuals  or  that  they  were  delivered fictitiously.”

“In  the  absence  of  bookkeeping  by  the  stores  accountant,  goods  purchased are  not  identified  in  the  accounts  as  part  of  the  State's  assets  or  its  stocks,  and  can therefore be  easily  misappropriated. This  was  the  situation  in  2020  for  many  of  the  goods purchased through the procedure of the special contract.  For  example,” the Audit bench says.

It then provided an extensive list of the goods purchased but not recorded in the “accounts”. Those goods include the stocks of hydroxychloroquine, azithromycin, and inputs to manufacture azithromycin, purchased by the MINRESI costing the public treasury over CFAF600 million.  There are also CFAF25.8 billion worth of screening tests, CFAF26.7 billion worth of proactive equipment as well as medical supplies received by the central administration (“25  special  contracts, 18  special  jobbing  orders  and  6  administrative  purchase  order  forms  that  were the  subject  of  reception  reports,” ).

Opportunism and conflicts of interest in the contracts awarding process

Thanks to the Trade and Personal Property Credit Registration documents of some service providers, the audit bench found out that some companies were created or reactivated just for the coronavirus response plan.  This is the case of Proof Consulting Group, Technologie Médicale du Cameroun and New Pharma Sarl.

35 to 40 days after their registration, those three companies won contracts in the response to Covid-19, for a cumulative amount of nearly CFAF700 million.

Also, there were conflicts of interest in the attribution of some contracts. “The Audit Bench established that three companies (ETS ABOA PERSPECTIVE, ETS ABS MOTORS and PHASE ENGENEEERING CAMEROON SA), which were awarded 6 contracts, for a total amount of CFAF 1,620,834,039, are managed by Mr. ABOUBAKAR SIDIKI DIABY, elder brother to Mr. OUSMANE DIABY, President of the working group set up by the Minister of Public Health to formulate a technical opinion on contracts awarded,” the report discloses.

CFAF1.2 billion of services fully paid for although not completed