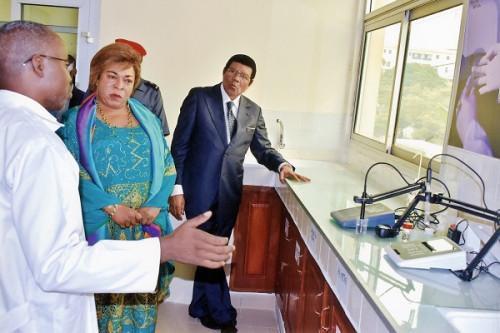 (Business in Cameroon) - Has Minister of Higher Education and Scientific Research (MINRESI) Madeleine Tchuinté misled the government about the local production of chloroquine and azithromycin? The answer would be “Yes” if basing on the preliminary report of the audit carried out by the State supreme audit on the management of the coronavirus response fund (XAF180 billion endowment in 2020). In its report, the audit office wrote that as of December 31, 2020, XAF657,088,524 was spent for the local production of five million hydroxychloroquine tablets and five million azithromycins by the Institute of Medical Research and Studies on Medicinal Plants (IMPM), which is under the MINRESI.

The IMPM did not produce those drugs locally, the report claims. The audit office says the IMPM imported five million hydroxychloroquine tablets, five hundred thousand azithromycin tablets, and 300 kg of materials that serve in the production of azithromycin, from India. The products were delivered on July 29, 2020, we learn.

So, according to the report, Madeleine Tchuinté resorted to importation despite the authorization and the over XAF4 billion financial backing she received from the government (on April 9, 2020) to make the IMPM produce drugs that will help in the fight against Covid-19.

However, this claim is countered by some documentary proofs presented by the MINRESI. According to some sources, those proofs will appear in the final audit report that will be published within the next 30 days. According to new facts not presented in the preliminary report, in November 2020, Ferdinand Ngoh Ngoh, secretary-general of the presidency of the republic, sent a letter to the MINRESI conveying the President of the Republic’s order to suspend the special production of hydroxychloroquine and azithromycin tablets.

Ferdinand Ngoh Ngoh also asked the MINRESI to quickly send the stock of hydroxychloroquine and azithromycin tablets in the IMPM’s possession to the Ministry of Public Health (MINSANTE) after a control mission to know the exact quantity of the tablets.

Even if the project of producing the tablets locally (for quick access to them since they are included in the Covid-19 treatment protocol) was suspended due to the November 2020 order, it is worth mentioning that the MINRESI imported the drugs four months earlier and the tablets were presented as local products. The audit office explains that the tablets delivered from India on July 29, 2020, were repackaged in packs labeled:  "manufactured by Zaneka, packaged by the IMPM" even though the tablets entered Cameroon in packs that meet good manufacturing and packaging standards.

The office reminds that the drug purchase is against Cameroonian regulation, which provides that such tasks should be exclusively performed by the National Supply Center for Drugs and Essential Medical Consumables (CENAME).

The office also questions the importation of the 300 kilograms of materials that would serve in the production of azithromycin tablets despite the evaluation report published, on April 28, 2020, by the MINSANTE’s department in charge of pharmacies, drugs, and laboratories, that says the IMPM was still unable to produce those drugs locally.

The management errors and malpractice suspicions raised by the preliminary report are comforted by the fact that as of December 31, 2020, none of the drugs had been sent to the MINSANTE for their distribution in Covid care centers as instructed by the President in November 2020.