Yaoundé will soon have its own Radisson Blu hotel 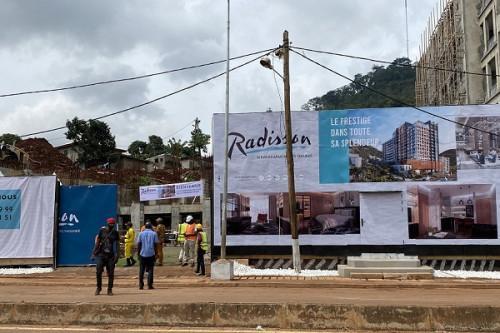 (Business in Cameroon) - The Radisson Blu hotel group laid the foundation stone for the construction of a complex in Yaoundé, the Cameroonian capital, on October 25.

According to the project specifications, the 5-star Radisson Serviced Apartment Yaoundé will be built near the U.S. Embassy, the Presidential Palace and 5 km from Yaoundé-Nsimalen Airport. It will be an upscale complex of 220 apartments including studios, one-bedroom apartments and accessible apartments.

Funds for this project, valued at CFA37 billion, will be raised from the U.S. International Development Finance Corporation (DFC). However, the local project carrier -BrightView Bethesda SA- offered Cameroonians the opportunity to become partners in the project by purchasing an apartment or studio. A studio will be sold at a minimum of CFA205 million for 34 m² while the minimum price for an apartment will be CFA255 million for 44 m².

"The partnership will guarantee housing owners regular cash flow. The purchased apartments will be rented out and will allow the owners to automatically receive an average monthly income," the company said, stressing that the Radisson Serviced Apartment Yaoundé will be open by 2025.

Let’s recall that the Radisson hotel is also under construction in Douala- the Radisson Blu Hotel & Apartments Douala.  It is scheduled to open in the first quarter of 2023. "We are delighted to accelerate our expansion in Cameroon with the addition of the Radisson Serviced Apartments Yaoundé to our growing portfolio in Africa. The introduction of our award-winning high-class Radisson brand in the country will further strengthen our presence in Central Africa. Our goal by 2025 is to double our presence in Cameroon with at least four properties, including Yaoundé and Douala," said Ernan Garnier, senior director of development Africa, Radisson Hotel Group.