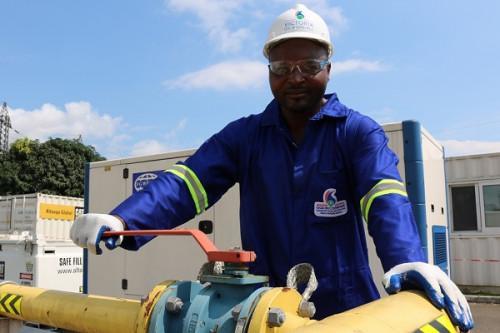 (Business in Cameroon) - Oil and gas company Gaz du Cameroun (GDC), which operates a gas field in Logbaba, Douala, was ordered to pay a total of $12.1 million (CFA7.4 billion) to its shareholder RSM Corporation. This fine brought the company into financial difficulties, we learned.

On April 4, 2022, Victoria Oil and Gas (VOG), the largest shareholder of GDC with a 57% stake, gave the information in a statement to investors on the London Stock Exchange where it is listed. The company also indicated that the stock was suspended from all forms of trading. Since that date, the situation has not changed much.

The International Chamber of Commerce (ICC) in London, which investigated the case, concluded that in early 2016, GDC wrongly began to include the royalty of Cameroon Holdings Limited 4 months before schedule. The proceeding found that the consequence of this early payout date is that RSM must now receive $10.6 million (FCFA 6.5 billion) with interest. "Under the arbitration rules of the ICC, the Award cannot be appealed and is to be paid without delay," reads VOG statement.

"The amounts in dispute in the International Chamber of Commerce arbitration are significant, and an unfavorable outcome would have a significant impact on the group's cash flow forecast and ability to continue as a going concern," Victoria Oil and Gas reported in November 2021, announcing its financial performance for the first 6 months of the year.

Gaz du Cameroun has until at least June 2022 to pay the amount owed to RSM, but had only $1.6 million (less than one billion CFA) in cash, according to its most recent results. On March 2, 2022, the company announced that it was seeking a loan of $1.5 million (less than CFA1 billion).

The case well reflects the complex dealings over natural resources in Africa. In 2016, at the time of the events, Cameroon Holdings Limited, the beneficiary of the disputed royalties, was 65% owned by Logbaba Project, now Gaz du Cameroun, and 35% owned by Victoria Oil and Gas. Both entities received dividends on profits.

The fine decision comes after a financial agreement was reached with RSM on another matter. However, it is not clear whether the necessary funds will be available. This situation poses a risk to the local banking sector, which has granted several billion CFA francs to GDC. It is also a source of concern for companies that depend on GDC for their energy supply or that rely on the company to develop their projects.