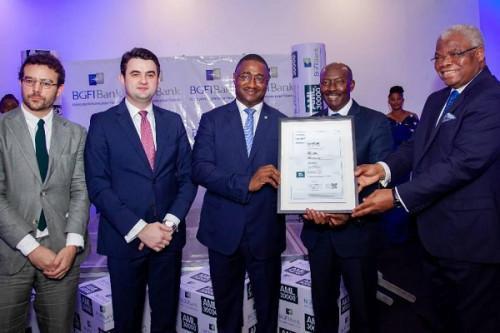 (Business in Cameroon) - BGFIBank once again proves its ambition to severely crack down on money laundering. The bank acquired on December 1, 2022, the AML 30 000 certification. This standard attests to the technical compliance and effectiveness of the anti-money laundering, anti-terrorist financing, and anti-proliferation of weapons of mass destruction (AML/CFT) systems put in place by financial institutions.

This new certification testifies that the AML/CFT system of the local subsidiary of BGFIBank is effective and complies with international standards. It is valid for three years with an annual review, allowing the company to "be part of a process of continuous improvement". It was awarded to BGFIBank Cameroon by the French certification body Coficert, following a process of voluntary upgrading and evaluation that lasted nearly a year. During this period, the bank's information, risk management, and anti-corruption systems were examined thoroughly with the assistance of the international law firm Ashurst.

BGFIBank thus becomes the first bank in Cameroon to be AML 30 000 certified, of the 18 banks operating in the country. It is, until now, the only credit institution to have successfully tested its AML/CFT system via "a rigorous set of specifications that includes the 40 recommendations of the Financial Action Task Force (the intergovernmental organization for the fight against money laundering and the financing of terrorism, ed)", according to Christian Mocanu, Coficert's Secretary General, who presented the certification to the bank's managers.

As a reminder, BGFIBank Cameroon was also the first bank in the Central African sub-region to obtain the ISO 9001/2015 certification, which attests to the quality of the management system. This was in 2015. In 2022, it also became the first credit institution to voluntarily submit to the evaluation of a financial rating agency. Bloomfield Investment Corporation gave the bank an "A" rating for the long term and an "A+" for the short term.

The banking group is seeking to receive many certifications and improve its quality of service as well as its management. "BGFIBank's ambition is to build an African group for the world. We’ve decided, since 2002, to materialize this excellence through certifications," explains the group's Chairman and CEO, Henri-Claude Oyima. Let’s note that BGFIBank has already obtained the AML 30 000 certification for its subsidiary in the Democratic Republic of Congo (DRC), Gabon, and Côte d'Ivoire.

"The Cameroonian subsidiary has become a growth pole for the sub-region and the group for a little over a year. With this new certification, we show where we want to be within the BGFIBank group as a whole,” said the Director General of BGFIBank Cameroon, Abakal Mahamat. BGFIBank Cameroon achieved a net profit of CFA8 billion in 2021, up 30% year-on-year. This year, the result should grow by 20%, according to initial estimates. At the end of the board meeting on December 2, CEO Henri-Claude Oyima announced that dividends would be distributed to shareholders as of next year.

Many experts believe that the AML 30000 certification could indeed contribute to strengthening this growth dynamic. According to Christian Mocanu, it helps reassure stakeholders: monetary authorities, regulators, correspondent banks, customers, suppliers, and employees. It also reduces financial, legal, and reputational risks, Paul Charlot said. For this lawyer at the Paris bar and member of the Ashurst firm, this is an important asset "in an increasingly unstable geopolitical context, where compliance risks are exploding in terms of money laundering and economic sanctions”.