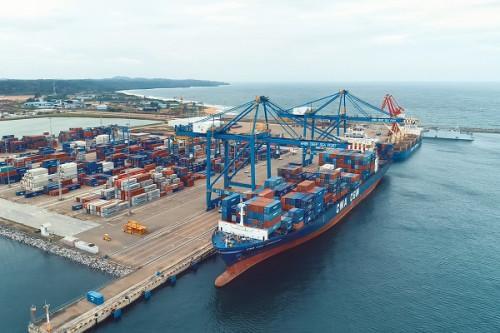 (Business in Cameroon) - Launched in November 2017, the 2nd phase of the construction of Kribi deep seaport had been interrupted in November 2018. In February 2020, they were relaunched, according to internal sources at the Autonomous Port of Kribi (PAK).

PAK estimates the cost of construction at about XAF400 billion. During that 2nd phase, a second container terminal of 750 meters long (twice as long as the first) will be built.

Alain Patrick Mpilla Ayissi indicates that during that phase, the works realized by Chinese company CHEC will consist of an extension (by 715 meters) of the quay wall. Also, the protective dike will be extended by 675 metres, and the harbour causeway will be developed over an area of about 37 hectares.

A container storage area covering an area of approximately 19 hectares will also be set up. Port equipment will also be manufactured and supplied and buildings constructed. The equipment to be provided include 5 quay cranes, 15-yard cranes, three empty container loaders and 25 tractors.

Commissioned in March 2018, the deep seaport of Kribi that has the largest draught on the West and Central African coasts (16 metres), currently has two terminals. The first is a 350-metre container terminal operated by the Bolloré-CHEC-CMA CGM consortium. The second terminal is a multipurpose terminal, under the management of KPMO, a joint venture of local port operators.