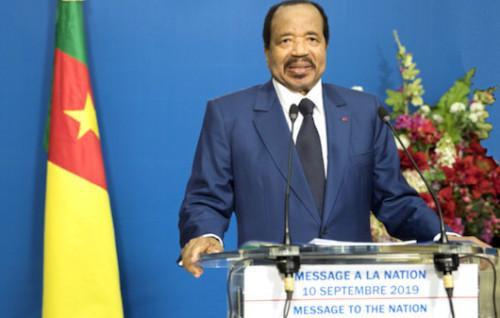 (Business in Cameroon) - On September 10, 2019, in a much-awaited televised message, Cameroon’s president Paul Biya spoke about the current sociopolitical crisis in the NorthWest and Southwest.

“I have decided to convene (end of this month) a major national dialogue that will, in line with our Constitution, enable us to seek ways & means of meeting the high aspirations of the people of the NW & SW Regions, but also of all the other components of our Nation,” Paul Biya announced.

The said dialogue, the president explained, would mainly be about the situation in the North-west and South-west. However, “it will also focus on issues of national interest such as national unity, national integration and living together, it is obvious that it will not concern only the population of these two regions. The dialogue will, therefore, rally all the sons and daughters of our beloved and beautiful country, Cameroon, to reflect on values that are dear to us, namely: peace, security, national unity, and progress,” he added.

The dialogue announced by Paul Biya will be articulated around themes that will answer the concerns of residents in the  South-west and North-west. It will also bring answers to issues like bilingualism, cultural diversity, social harmony, reconstruction and development of regions affected by the sociopolitical crisis, the education and legal system, decentralisation and local development. Issues like the return of refugees and displaced persons, demobilization and reintegration of ex-combatants as well as the diaspora's role in the country’s development will be addressed.

Presided by the prime minister, the dialogue “will bring together a wide range of personalities: parliamentarians, politicians, opinion leaders, intellectuals, economic operators, traditional authorities, religious authorities, members of the diaspora, etc. Representatives of the Defence and Security Forces, armed groups and victims will also be invited,” the head of state indicated.

Prior to the meeting, the prime minister will conduct large consultations on various viewpoints that will be used as inspiration sources for the debates. Delegates will also be sent, in the coming days, to meet the diaspora for their contributions to the resolution of this crisis.

Let’s remind that the socio-political crisis started about three years ago in South-west and North-west Cameroon. It started as corporate demands expressed by lawyers and teachers but gradually became violent pro-independent claims with armed groups wreaking havoc, death, and grief.

21,291 Cameroonians fled to Nigeria to avoid combats between armed groups and the regular army, according to the  UNHCR. International Crisis Group indicates that at least 1,850 people have died during the 20 months of combat.