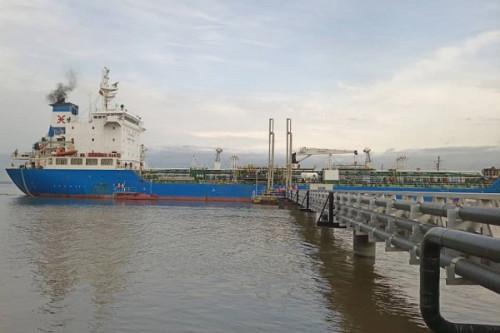 (Business in Cameroon) - After 20 years of inactivity, the oil terminal of the port of Douala-Bonabéri is operational once again. Indeed, on April 11, 2021, the oil terminal welcomed oil tanker Eships Barracuda.

"The oil wharf on the rebuild mooring dolphin at the port of Douala-Bonabéri resumed operations on Sunday, April 11, 2021. The oil tanker Eships Barracuda is the first to be unloaded at the new terminal," the port authority informs.

In 2001, the oil terminal’s dolphin was destroyed after two consecutive ship accidents. So, quay N°1 of the conventional terminal was temporarily used for offloading operations of petroleum products destined to the national market and some neighboring countries.

However, there was an ever-present risk that the products may explode or cause fire outbreaks that would burn the conventional port and Quay N°1. With the resumption of the operations of the oil terminal (which is better suited for the task), those risks are greatly averted.

The construction of the modern dolphin started in 2019, with French company E.JN. Negri tasked to build a pedestrian access footbridge and pipe support, 2 mooring dolphins, and 2 berthing dolphins. The overall cost of the works is XAF10 billion.

Eships Barracuda is a 120-meter long and 20-meters large oil tanker. It is calling at the port of Douala from Lomé (Togo) with both chemical and petroleum products.