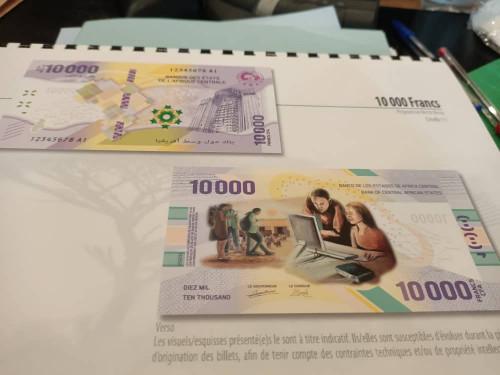 (Business in Cameroon) - The Bank of Central African States (BEAC) is currently finalizing its project for the issuance of new banknotes and coins in the CEMAC region. This issuance was approved on October 2, 2019, by the Ministerial Committee of the Central African Monetary Union (UMAC).

Indeed, at the end of the meeting it held that day in Yaoundé, the committee indicated that it acknowledged the launch of works for the issuance of a new series of BEAC banknotes. It then asked the central bank’s board of directors to finalize, as soon as possible, the works necessary for the creation and gradual release of the new series.

Days ago, images of a new series of banknotes were posted on some online platforms. However, as the images were not officially confirmed by the central bank, there is no certainty whether they truly depict the new series or they are just samples on which the central bank worked in the framework of the project ongoing since 2019.

Contacted by Business in Cameroon, an authorized source simply responded that no information about the new banknotes and coins series could be published for the time being.

Nevertheless, it is hard not to believe that the images that were leaked are samples from the BEAC.  Indeed, besides the central bank’s coat of arms, the inscriptions on the XAF500, 1000, 2000, 5000, and 10,000 banknotes pictured are in French, English, Arabic, and Spanish, which is in line with the BEAC’s ambition to promote, for the first time, the official languages used in the CEMAC region.

So, the main unknown fact is when the new notes and coins (ed. note: some sources claim that a XAF250 coin will be created) will be released. Based on the previous pattern in the BEAC’s issuance of new banknotes and coins series, the logical answer is 2022. Indeed, the region’s previous series were issued respectively in 1972, 1982, 1992, and 2002. The last series was issued in 2002 (according to the BEAC) and new series are issued every 10 years approximately, thus the hypothesis that the new series will be issued in 2022.

But, the central bank could issue the series earlier, fulfilling the wish expressed by the UMAC, on October 2, 2019, of seeing the new series released as soon as possible.