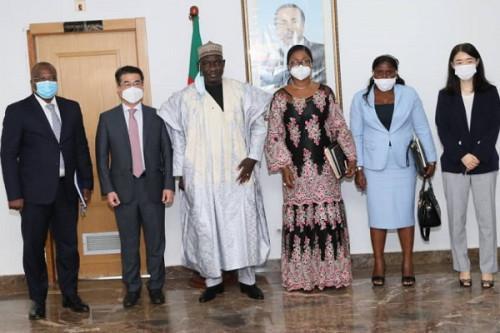 (Business in Cameroon) - The second phase of Cameroon’s E-procurement project, funded by South Korea, is yet to be launched despite the signature of a memorandum of understanding between the two parties since November 2018.

According to a note from the Ministry of Economy (MINEPAT), this is as a result of the embassy of South Korea’s misunderstanding of Cameroon’s internal procedures that require the signature of contractual agreements for each phase of the project.

The note also indicates that during an emergency meeting held on July 14, 2020, and chaired by the secretary-general of the Ministry of Public Procurement, it was agreed that the said ministry should work closely with Korea's development agency (Koica) to elaborate a draft memorandum of understanding that will be submitted to the Korean embassy.

The Minepat then suggested the draft memorandum should be co-signed by the embassy and the Ministry of Economy before August 10, 2020 (probable date of the budget conference) to ensure the counterpart funds will be programmed into the budget of the 2021 financial year.

The "Cameroon Online E-procurement System" (Coleps) project is financed by South Korea to the tune of CFAF 3 billion. The ultimate objective is to reduce corruption in the public procurement sector in Cameroon because this scourge is very often favoured by the physical contact between service providers and civil servants in that sector.

In the report it published at the end-2018, the National Anti-Corruption Commission (Conac) ranked the Ministry of Public Procurement as the most corrupt administration in the country.

As a reminder, in 2017, 1,898 contracts were programmed via the Coleps and 177 tender notices published.