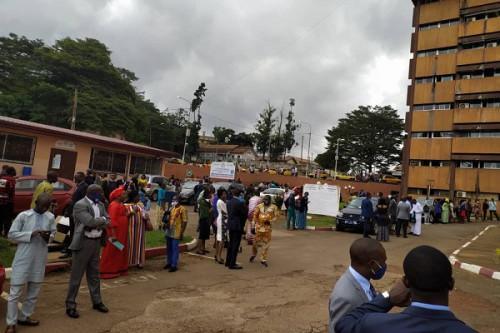 The wage sustainability ratio is set by the CEMAC as an indicator under the multilateral surveillance system. It evaluates the State's ability to remain solvent or creditworthy while ensuring sustainable wage payments without a continuous increase in debt stock. The threshold is 35%.

It represents the ratio between the volume of tax and customs revenues collected in a given year and government personnel expenses. In an official document annexed to the 2022 finance law, the Cameroonian government reveals that it has never been able to meet this ratio since 2009 (which will mean 16 years of underperformance in 2025). This is due to the explosion in recruitment in the civil service, compared to retirements.

To lower the sustainability ratio to less than 35% by 2025, Cameroon plans to strengthen control mechanisms and continue to clean up the State's payroll, according to the medium-term economic and budgetary programming document (2023-2025). There are also plans to review the process of recruitment and management of the State's human resources, to guarantee control of staffing levels, and ensure consistency between the quality of recruitment and the staffing needs that are essential for boosting the priority sectors in line with the NDS30 (National Development Strategy 2030). The State also intends to accelerate the conditions for the effective implementation of the new personnel and pay management system, Sigipes II.

In 2018, the Minister of Finance initiated the physical counting of state personnel (Coppe) to clean up the state pay file.  The operation revealed thousands of fictitious public agents and exposed pensioners and personnel still active unduly in the file. According to Prime Minister Joseph Dion Nguté, COPPE enabled the Treasury to save a total of CFA51 billion on the wage bill of public agents in 2021.

As for the rationalization of recruitment, the Minister of Public Service and Administrative Reform (Minfopra), Joseph Lé, signed 28 orders on June 11, 2021, opening competitions for the recruitment of new staff in different state bodies. In total, only 1,536 positions were open. This figure shows a drastic decrease, compared to the 3,700 places filled in 2020, 5,411 in 2019, and 5,179 in 2018.

At the same time, in a letter dated May 19, 2022, co-signed by the Ministers of Higher Education and Civil Service and addressed to the Secretary-General of the Presidency of the Republic, the government suggested that it might suspend, as of 2023, the systematic recruitment of teachers trained in the Écoles normales supérieures (ENS) and the Écoles normales supérieures de l'enseignement technique (Enset).

The government revealed that the explosion in recruitment in the civil service is mainly due to the systematic integration into the state workforce of graduates from ENS and Enset. "The number of secondary school teachers increased 2.7 times from 30,640 to 83,308 between January 2010 and June 2020. They now represent 34.4% of the civil service workforce, whereas they represented only 15.8% at the beginning of 2010. Similarly, their wage bill represents 32.3% against 21% in 2010," the government said.