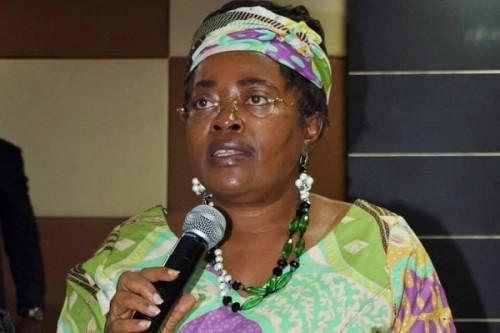 (Business in Cameroon) - On January 8, Minette Libom Li Likeng (photo), the Minister of Posts and Telecommunications referred to Hessana Mahamat, the chairman of the board of directors of the Telecommunications Regulatory Agency (ART), about the “Management” of this body in charge of regulating the telecoms sector in Cameroon.

In her correspondence, the minister drew the chairman’s attention to the “non-signature of the resolution to adopt the budget for the financial year 2020, as well as the resolution acknowledging the agency’s 2019 performance report.” “At your charge and that of the Director-General, I deplore the serious managerial shortcomings underway at the ART, the resolutions of the Board of Directors not being considered in their legal force and the legal provisions governing the management of the institution being disregarded,” Minette Libom Li Likeng wrote.

In view of this situation, Mrs. Libom Li Likeng asks “as a last resort,” for an easing of tensions in the management of the ART where a climate clearly harmful and detrimental to performance prevails.

The official instructed the chairman to sign the resolution of the Board of Directors adopting the budget for the financial year 2020 as well as the one acknowledging the agency's 2019 performance report. Due to the unavailability until then of the working documents to the directors, she asked Hessana Mahamat to postpone the extraordinary meeting of the Board of Directors convened for January 13.

Finally, Minette Libom Li Likeng instructed the Director general, Philemon Zo'o Zame, to prepare and present the documents requested by the chairman of the board so that the board meeting postponed to January 28 will be held.

The chairman of the board justifies the non-signature of the draft resolution adopting the 2020 budget by the fact that the Director-General was asked, in vain, to produce three documents detailing the financial impact of his decisions on the ART’s payroll.

In fact, during a board meeting in August 2019, the chairman noted the existence of a compensatory allowance allocated to some ART officials (Director-general, Assistant director-general and some directors). At this point, Hessana Mahamat reminded the Director-general of the observations of the Executive Board with regard to the Comptroller’s special report reviewed during the 43rd ordinary session held on August 30, 2019, on the one hand, and the general report of the Committee in charge of sanitizing the payroll on the other.

Mr. Hessana specifically referred to  “the presence in the salary of the Director-General of an accommodation allowance amounting to XAF900,000, when he is already housed by the ART with a rent of XAF2 million; the payment of a seniority bonus of 18 years, the amount of which does not correspond to the seniority of the current Director-General, appointed barely two years ago; the payment of a compensatory indemnity amounting to XAF1.8 million, and that of the Directors to XAF300,000.”

According to the chairman, while the DG is granting himself these benefits, he is at the same time unilaterally and without any explanation whatsoever eliminating certain benefits granted to the staff (telephone, on-call and performance bonus, compensation allowance on the step, end-of-year bonus, medal bonus, Christmas tree, etc.). “It is within the competence of the Board of Directors to remedy the inadequacies of the salary scale if there are any, and not for the Director-General to proceed without prior authorization from the Board,” Hessana Mahamat indicates.