Cameroon: Yaoundé-Nsimalen expressway should be delivered in the next Four months, officials require 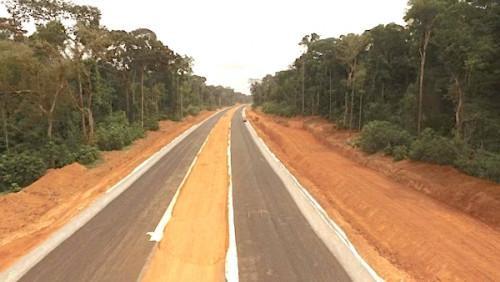 (Business in Cameroon) - Companies building the rural bend of Yaoundé-Nsimalen expressway, in Cameroon, must deliver the works in the next four months. This is one of the main requirements formulated by Henri Eyebe Ayissi and Célestine Ketcha Courtes, respectively minister of lands and that of housing and urban development, in a joint statement signed on September 23, 2019.

In the statement, the two officials who noticed that the works are being delayed by residents still living in areas where the expressway should be built indicated that no building should be allowed on the secured 200-meter areas around that expressway.

They also invited municipal authorities to sensitize populations on the positive impacts of this infrastructure. Administrative authorities are also asked to reassure residents of the effective payment of compensatory allowances for lands expropriated.

Henri Eyebe Ayissi and Célestine Ketcha Courtes also asked residents to leave the areas marked for the construction so that the government can initiate demolitions by the end of this month (Sep 2019).

Let’s note that the Yaoundé-Nsimalen expressway includes an urban portion and a rural bend. This XAF189.8 billion project was launched on May 2, 2014. Normally, it should have been completed within 36 months (by May 2017). However, due to the non-payment of compensations for expropriated lands, some of the areas marked for the projects are still occupied by residents.