AFCON 2019: Italian firm Piccini assures the 60,000-seat Olembe stadium will be delivered in due time 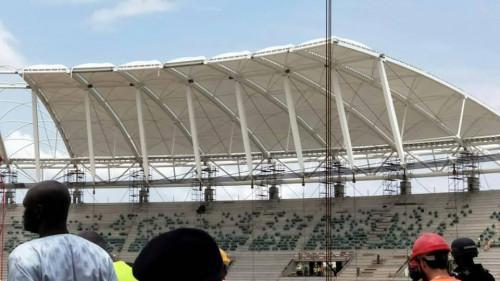 (Business in Cameroon) - In preparation for the next African Cup of Nations (AFCON) which Cameroon is to host between June and July 2019, the African football confederation (CAF) started conducting an inspection mission in Cameroon since November 11. The delegation led by CAF's Deputy Secretary General for Sports and Development, Ghanaian Antony Baffoe, visited the Olembe facility, suburb of Yaoundé. Main inspection points include the lawn, changing rooms, car parks, the presidential stand, as well as the seats and roof at the stadium.

During the inspection, the managers of the Italian company Piccini in charge of building works showed the green carpet that will be laid on the playground. According to Piccini managers, it only takes 45 days for the lawn to be equipped, including goalkeeper posts. As for the seats and roof, installation has already began and is continuing normally. The stadium's delivery dates in December 2018 should be respected, the company said. The two additional training grounds 1 and 2 of the Olembe stadium were also visited. Work is progressing at a “normal” pace. The same goes for the Beac stadium.

With regard to the changing rooms and the presidential stand, Piccini indicated that all that remains is the parts’ assembly phase. Car parks, of more than 12,000 spaces, are already equipped. After Yaoundé, Garoua will be visited today November 12. Then the CAF inspectors will visit Bafoussam and Douala, respectively November 13 and 14. The mission ends on 15 November 2018.