No more takeoff for Camair Co, all aircrafts out of order 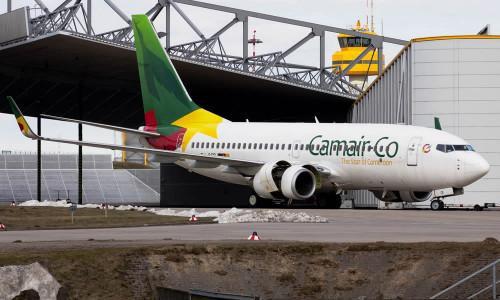 (Business in Cameroon) - Cameroon’s airline Camair Co has been in big trouble since the beginning of this year. After the company announced in January that 4 aircrafts of its fleet of 6 got out of order, the remaining two also broke down.

On March 19, the aviation authority instructed Camair Co to stop operating its Chinese MA 60 due to a “Tail Strike” (when the plane’s tail hit the ground) that occurred March 10 at Bafoussam Airport, Western Region. A few days earlier, it was the company’s Bombardier Q400 that broke down, after hitting a stepladder in the parking following a violent storm, sources said.

However, in order to continue ensuring regional and domestic services (with a rate of 100 flights a week), Camair Co is now only using a small aircraft from Brazilian manufacturer Embraer. The aircraft was rented from Equatorial Guinea, we learnt. This situation, let’s recall, occurred when the airlines’ top management was aiming for a soon resumption of flights to Paris, France.

2019 is on the path to be a tough year for Camair Co with serious underperformances. Yet, the company performed well last year, after more than 6 years of difficulties. In January this year, it posted a turnover of XAF1.4 billion, compared to an average monthly revenue of XAF2.4 billion throughout 2018. Executives, who projected figures to further fall to XAF700 million in February due to the suspension of 4 aircrafts, now see a much wider gap for this month and the rest of the year.

Such a drastic underperformance cannot be cushioned unless the government backs Camair Co but the government itself has been facing treasury tensions for the past two years due to increasing security expenses (Boko Haram, Anglophone crisis, unrest in Adamaoua etc.). According to reliable sources, fixing the engines of its two Boeing 737 alone will cost Camair Co a minimum of XAF14 billion.