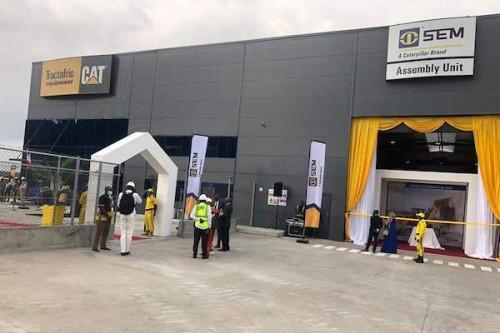 ( TRACTAFRIC EQUIPMENT ) - On 23rd January 2021, in the back yard of a 2500 m2 building in which parts of civil engineering machinery and equipment can be seen, a loader, a compactor, a grader and a bulldozer, all with their headlights on, are displayed in front of an audience of personalities led by the Minister of Public Works, Emmanuel NganouDjoumessi. In his capacity as representative of the Head of State, this member of government came to preside over the official inauguration ceremony of the assembly plant for civil engineering machinery and equipment, built in Cameroon by Tractafric Equipment, thanks to the granting of a 3-hectare site in the industrial zone adjacent to the deep-water port of Kribi, in the southern region of the country. 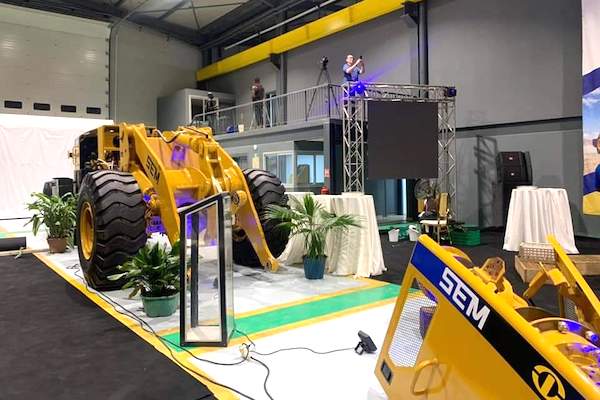 These machines, whose movements bring a smile to the face of the representative of the Head of State, have the particularity of having been assembled on site in Cameroon, giving it the status of the first country to house a machine assembly unit in Central Africa. “Cameroon is the cradle of our activities. Our group was the forerunner in equipping construction sites there with its partner Caterpillar. Optorg was among the first, through its subsidiary Tractafric Equipment, to equip operators in all sectors in Cameroon with modern equipment. In this way, we have contributed to enhancing the country's forest resources, equipping its industry and developing all types of infrastructure (...). The choice of Cameroon to set up this new infrastructure was therefore natural," explains Tarafa Marouane, CEO of the Optorg Group, the parent company of Tractafric Equipement.

Still on the advisability of opening this assembly unit in Cameroon, the CEO of Optorg recalls that in addition to the almost secular historical ties between Tractafric and Cameroon, the country has the most diversified economy in Central Africa and is currently conducting a process of decentralization, which should help to provide municipalities with various infrastructures.

Investment of about 2 billion CFA francs, the assembly unit of Kribi, which has a production capacity of 250 machines per year, is a godsend for Cameroon, said the Minister of Public Works. "By choosing to set up this plant in Kribi, you are supporting the government's import-substitution strategy," said Minister Nganou-Djoumessi. Before adding: "The advent of this plant is a response to the needs of decentralized local authorities in civil engineering equipment.

From this point of view, Alain Dufournier, CEO of Tractafric Equipment for Central Africa, announced that the company he heads is currently negotiating a partnership with the Fund for Equipment and Inter-Communal Intervention (Feicom), the bank of Cameroonian municipalities, to facilitate the equipment of the country's municipalities in civil engineering equipment straight from the factory in Kribi, which produces

exclusively equipment of the SEM brand. "The SEM range meets the needs of many Cameroonian operators. They are quality machines, simple and solid, with a lifespan of 10,000 hours. Tested locally, these machines are perfectly suited to the country's operating conditions," explains Othman Douiri, CEO of the Tractafric Equipement group.

"In addition to the factory, Tractafric Equipement also has a technical base in Kribi, with a specialized maintenance workshop and a parts shop, which will make it possible to support all the players in the Kribi industrial-port zone and, more broadly, all the operators in the south of the country. We will offer them a specialized service for the maintenance of construction site machinery, handling trucks, generators and engines," explains Alain Dufournier, who points out that the machines coming out of the Kribi assembly unit will be marketed throughout Central Africa at affordable prices.