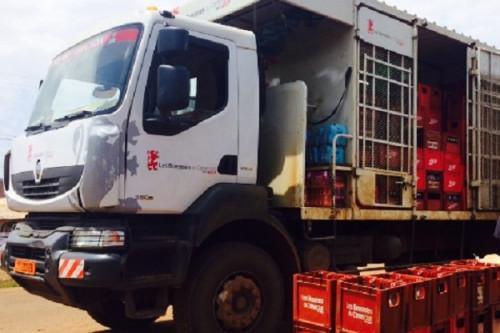 (Business in Cameroon) - Société Anonyme des Brasseries du Cameroun (SABC) has recently been the victim of an attack by an armed group. The incident occurred in the town of Santa, not far from Bamenda, the main town in the English-speaking north-western region.

"According to initial reports, a truck containing our products and belonging to one of our transporters was stopped by an armed group before being burned by the latter," one of the group’s executives confirmed.

For the time being, neither the identity of the assailants nor their allegiance is known. SABC is concerned about the fate of those who were in the vehicle but also saddened by this new attack, which characterizes the new difficulties the company has to deal with. There is also no current estimate of the losses incurred.

This attack comes at a time when representatives of the government and that of separatist armed movements operating in the English-speaking north-west and south-west regions are discussing a ceasefire.

In a report published in 2019, the Inter-Patronal Grouping of Cameroon (GICAM) estimated that the losses incurred by its members over three years due to the conflict amounted to CFAF800 billion. This estimate has surely been exceeded by now.