Cameroon : Claims of decaying 160,000 tons of rice in Semry’s warehouses is false, the company says 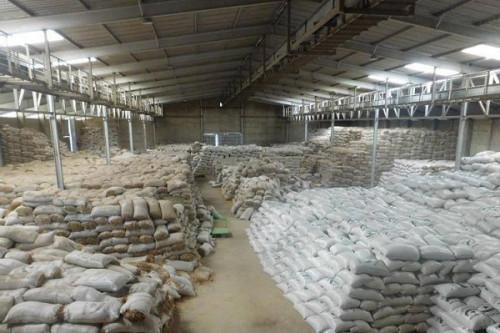 (Business in Cameroon) - On August 5, Cameroonian politician and activist Bernard Njonga published pictures of piles of rice produced by Société d’expansion et de modernisation de la riziculture de Yagoua (Semry). “Semry’s Yagoua and Maga warehouses are full of unhusked rice, some of which have been there since 2015,” while the country has been massively importing the product. This was the comment following the pictures.  Indeed, the country imported more than 800,000 tons of rice in 2017, spending more than XAF150 billion.

In response to the publication, Semry’s general management published a release to correct the activist’s claims. According to the release, there are inaccuracies in Bernard Njonga’s figures. For instance, the company reveals, its overall rice perimeters in Yagoua and Maga is 11,500 hectares (5,300 hectares in Yagoua and 6,200 in Maga). “This perimeter is exploited by about 20,000 families. The figure of 130,000 families of rice growers announced by Bernard Njonga’s document is inaccurate,” the management writes.

In addition, Semry’s production since it was created in 1985 is 110,000 tons. So, it could not have possibly produced 160,000 tons within four years. Due to important rice field renovation works initiated by public authorities in the framework of the Projet d’urgence contre les inondations (Pulci), the perimeters effectively operated an average of 10,000 hectares representing about 65,000 tons of yearly production.

“To relaunch the transformation of unhusked rice, in 2017, public authorities provided two 5 tons/hour assembly lines to Semry. The one in Yagoua is already operational while the Maga line is being installed. As of 2017, in anticipation of the commissioning of the two lines, Semry started progressively building its unhusked rice stock in its warehouses,” Semry informed without providing any information about the current volume of that stock.

It informs that its rice is already available in the three northern regions namely, Maroua (11 stores), Garoua (2 stores) and Ngaoundéré (4 stores). In addition, it is in the process of launching a regular supply in Yaoundé.

In its own words, Semry’s rice has “high nutritional quality and remains the best of all the kinds of rice present in the Cameroonian market since the national rice tasting competition organized in Yaoundé in the framework of Ebolowa agropastoral show [in 2011] by the ministry of trade.”