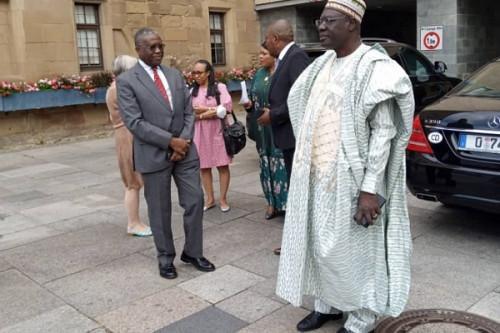 (Business in Cameroon) - The Cameroonian government has sent a mission to Germany to seek partners for the Multifunctional Centers for Youth Promotion (CMPJ). The one-week mission, which started on June 20, is led by the Minister in charge of Youth (Minjec), Mounouna Foutsou.

In Germany, the Cameroonian delegation will seduce investors by promoting this project dedicated to young people aged 15 to 35, registered at the National Youth Observatory. Minister Mounouna Foutsou will meet with German public and private partners and discuss with the Cameroonian diaspora the incentives put in place by the government to facilitate their return and their investment in Cameroon.

The Cameroonian delegation hopes, by the end of this mission, to mobilize the human, material, and financial resources necessary for training in the trades of renewable energy and metal carpentry. As a reminder, the association of Cameroonians in Germany, German Business Center Hima Sarl, and the Cameroonian government signed in March 2020, a renewable 3-year partnership as part of the CMPJ project.

Under the agreement, Business Center Hima Sarl will retain ownership of its material, technical and financial participation in the project. The Cameroonian Ministry, on the other hand, provides the government's moral guarantee and will set up socio-professional integration facilities for the benefit of the young people who will be trained in the CMPJs.

However, while everything seems to be on a good way for its implementation, the project has been slow to materialize for five years. On September 12, 2017, the president of the National Order of Architects of Cameroon (Onac) and a delegation of Chinese engineers met with Minjec officials to discuss the models and estimated costs of the construction of CMPJs.

Over three years, the Chinese engineers were to build an International Youth Center in Kribi, two reference youth centers in Yaoundé and Douala, 10 regional youth centers, 58 departmental youth centers, and 360 district youth centers. That makes a total of 431 youth training centers. The investment was estimated at between CFA25 billion and CFA30 billion. But these funds are not yet available. "Negotiations between the parties are still ongoing," Minjec said.

If the project is carried out, it should help address the issue of the training-employment mismatch. Many analysts mention this problem as one of the causes of unemployment and underemployment in Cameroon.