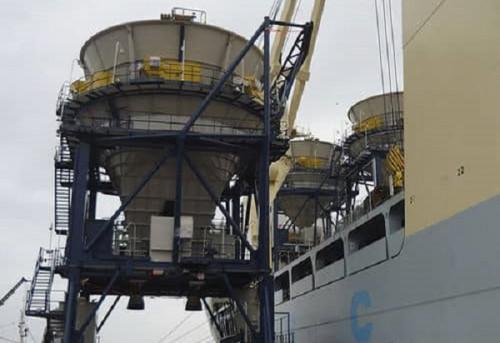 (Business in Cameroon) - On November 1, 2021, the Port of Douala-Bonaberi will introduce an environmentally friendly freight handling and transfer system for bulk solids (like wheat flour, clinker, rice, cement, etc…), informs a circular signed on September 29, 2021, by Cyrus Ngo’o, MD of the Port Authority of Douala (PAD).

"Given that the port has only two ecological hoppers [a kind of pyramid-shaped tank for transferring powdered products] for the time being, and pending the arrival of other promised equipment, the handling, and transportation of bulk solids will proceed as follows: from November 1, 2021, to the arrival of additional equipment (in January 2022), the products will be ecologically handled onboard [without letting any particle pollute the air or grounds] when there is a clinker ship at bay and alternate on-board handling when there is more than one ship," Cyrus Ngo'o wrote.

Also, he adds, on the ground, the products will be handled and transported in an environmentally friendly manner using watertight trucks exclusively. Once the additional equipment expected is commissioned, both onboard and onshore handlings will be carried out in an environment-friendly manner, the port authority says adding that any violation of these provisions will be fined per the laws set by the judicial police.

According to Gabriel Manimben, CEO of Agence de prestations Maritimes (APM SA),  this decision corrects a failure in the PAD’s environment protection provisions.  "Since the establishment of cement factories in Cameroon, the PAD’s provisions have not been updated to address the type of polluting goods called bulk solids, like other ports on the coast did.

Indeed when clinker, which is used to produce cement, is handled and transported, it emits dust that settles on food products stored at the port or even in offices. Some specific equipment, like ecological hoppers, are designed for those tasks without letting the dust out. The sensors on that equipment absorb the dust. This is the kind of equipment the port requires from handlers of such products (...) There are also specific trucks to prevent the bulk solids from being spilled on roads when loaded in trucks that are not watertight.

It should be noted that cement is a corrosive product that quickly damages roads when spilled. Also, the dust inhaled by workers causes several lung diseases. So, it was time the PAD took this decision to align the Port of Douala with international standards,” he said.