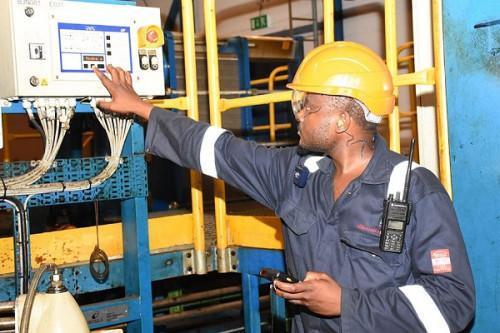 (Business in Cameroon) - The local branch of Globeleq in Cameroon announced it has launched a restructuring process. The independent electricity producer -70% owned by British International Investment (BII, formerly CDC Group), did not provide further details on this process. However, it could be a “merger of entities”.

The likelihood of the “merger of entities” option is also reinforced by the number of jobs that the British multinational wants to cut in Cameroon. According to our information, the parent company wants to lay off 120 people and the first list of 28 names has already been published. At the end of 2019, Globeleq Cameroon had 189 employees - all Cameroonians, according to a company document published in 2020. This means that more than 60% of current jobs are expected to be cut.

The State of Cameroon holds 44% of the capital of DPDC and KPDC. The boards of directors of these companies are chaired by the Minister of Water and Energy, Gaston Eloundou Essomba. Therefore, such an operation cannot be carried out without the approval of the government, which seems to have already been obtained. The Minister of Labor and Social Security, Gregoire Owona, created on November 14, 2022, an ad hoc committee responsible for "negotiating the terms of dismissal of certain workers" of the three entities. The MoU signed between the parties provided for a dismissal compensation equivalent to 3.5 months' salary per year of service, in addition to other social benefits. Employers will also have to pay taxes on this indemnity, a member of the ad hoc committee informed.

To justify these "economic layoffs", Globeleq says it wants to "protect itself from a risk of deep crisis in the face of the difficulties of its only client Eneo, Cameroon’s power utility."Eneo collects CFA27 billion per month but has commitments of CFA34 billion. The solution for this structural deficit still seems out of reach,” reads a letter sent to staff. In addition, the Globeleq management fears, "this deficit could double when the Nachtigal hydroelectric plant comes into service (partial commissioning set for 2023), or even worse, taking into account the billing of the Memve'ele hydroelectric plant”.

This argument has not convinced the staff representatives. In a letter sent on November 20 to Hans Simb Nag and Frédéric Mvondo, respectively Director General of KPDC and the two other entities (DPDC and GCMS), the staff representatives highlight what they call a contradiction: while Globeleq uses Eneo's "difficulties" as an excuse to trigger its restructuring, the subsidiary of the British investment fund Actis (51% of shares) has instead signed a new company collective agreement that has increased its wage costs by more than CFA800 million.

From an accounting point of view, Eneo is a profitable company. It is however experiencing cash flow pressures due to collection difficulties, particularly with the State (one of the shareholders with 44% of shares) and its subdivisions. Hence the monthly cash deficit of CFA7 billion mentioned by the management of Globeleq in Cameroon. This situation is a risk for the financial balance of the sector, as it leads the electricity distributor to accumulate a large volume of debt with its suppliers, including independent power producers such as KPDC and DPDC.

Since 2020, the government has been deploying a plan to gradually pay the debt owed to the sector each year through various types of mechanisms (securitization, issuance of government securities, cross-debt compensations, etc.). The latest operations, which were completed this year, enabled Eneo to clear the debt owed to KPDC and DPDC at the end of June 2021 (CFA93 billion). As a result, Globeleq's subsidiary in Cameroon is now in a more than comfortable financial position. As an illustration, DPDC's gross cash flow was close to CFA17 billion CFA francs at the end of October and was projected to be close to CFA19 billion at the end of 2022. While preparing its 2022 budget, the company was not expecting more than CFA2.5 billion in cash flow at the end of the year. Therefore, the "difficulties of Eneo" excuse seems more like a pretext. Moreover, according to internal sources, this reorganization is the materialization of a strategic plan, presented to the group's chairman and CEO, Mike Scholey, by the director of operations, Gionata Visconti, right after he took up this position in January 2021. It aims to secure the company’s earnings in Cameroon in the face of the gradual rise of hydroelectricity in the country's energy mix.

Sources inside Eneo confirmed that with the connection of the Memvé'élé hydroelectric plant (211 MW) to the power grid via a better quality transmission line (which now allows all the energy produced by this infrastructure to be distributed) and the commissioning of the Nachtigal (420 MW) and Lom Pangar (30 MW) hydroelectric plants, thermal power, which is more expensive and polluting than hydroelectricity, will be less used. According to our information, the 20-year contracts signed between Eneo and DPDC on the one hand, and Eneo and KPDC on the other, are currently being reviewed. It is not known at this time whether there is a link with this new dynamic.

Faced with these potential losses of market share, the British group is working to reduce its costs in Cameroon to maintain its margins. Globeleq has also decided to increase the automation of its plants and outsource maintenance activities. A few months ago, KPDC awarded a project to upgrade the automation of the Kribi gas plant to the Finnish company Wärtsilä. The latter has also been awarded a 10-year maintenance contract for the Kribi gas plant. Similar contracts are also planned for the Dibamba heavy fuel oil power plant.