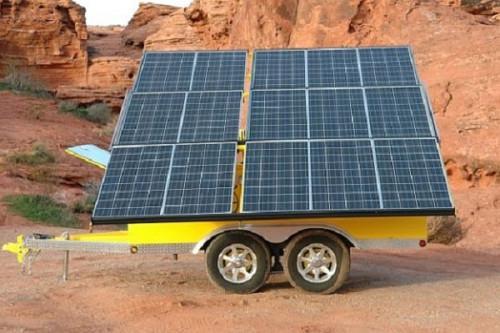 (Business in Cameroon) - Cameroon and electric utility ENEO are currently fine-tuning a project to install mobile and modular emergency solar power plants. This was revealed, on May 5, 2021, in a release issued by the electric utility. According to the release, this project is being developed to alleviate the pains of households and businesses in the northern regions, where there has been a continuous power outage (for several months now) because of the drop in water levels at the Lagdo dam.

The energy infrastructures, which are expected to generate a total of 30MW energy, will be installed in Maroua (the Far North) and Guider (in the North), the release informs. But, according to a letter the Minister of Water and Energy, Gaston Eloundou Essomba, sent on April 16, 2021, to Eric Mansuy, ENEO’s CEO, the infrastructure will also be installed in Kousseri (Far North). The letter also called for a quick implementation of the project approved in January 2021.

“In our bids to find the most suitable solutions to bridge the energy gap in the Northern Interconnected Network (NIN), I authorized, through my letter of January 11, 2021, the company SCATEC to initiate commercial and technical discussions with you to urgently conclude arrangements for the installation and commissioning of mobile and modular emergency solar power plants in Maroua, Guider and Kousseri. The overall capacity of those plants will be 30MW,” Minister Eloundou Essomba’s letter reminded.

ENEO cautious about the project

According to a source close to the case, those power plants should have been commissioned by March 2021, at the same time the 20MW electricity generation capacity equipment was transferred from the Ahala power plant to Gaoura and Ngaoundéré, with unsustainable fuel costs (XAF3 billion fuel costs every month).

However, due to technical contingencies, ENEO plans to install these mobile solar power plants before the end of 2021. "Eneo's engineers are expeditely carrying out the technical feasibility of the project to inject the most reliable and sustainable energy possible [into the NIN]," the electric utility says.

"It is an interesting project. But, we are obliged to be cautious for two reasons. First, it is a new method in Cameroon. Also, solar energy is a bit special. Even if there is a lot of sun in the North, solar energy is by definition variable energy. We must be sure that the quantity of energy that will be injected from these modular power plants will be stable, as required by both industrial and residential customers. So there are technical aspects that need to be verified. And, although we have this unsolicited offer, we are still required to carry out consultations to ensure that there are no alternative offers," an ENEO source familiar with the matter says.

Other projects on hold

According to our sources, Eric Mansuy should have sent his reply to Minister Eloundou Essomba concerning his views about the project by April 24, 2021. Nevertheless, the government sees in the project a solution to bridge the energy deficit in the northern regions. As Minister Eloundou Essomba explains in his April 16, 2021, letter, the government's plan to lease the mobile power plants for four years (2021-2024) at an undisclosed cost will reduce the current load shedding in the northern part of the country by 98%. It is also expected to reduce the fuel costs needed to run thermal power plants in the northern regions by XAF5 billion over the first nine months of operation.

Another more mature and sustainable 35MW solar energy project has been on hold for almost four years now. Speaking about that project, ENEO’s management explains that it has informed the government and partners concerned about the need to quickly conclude discussions with the issuance of operating licenses and contractual agreements.