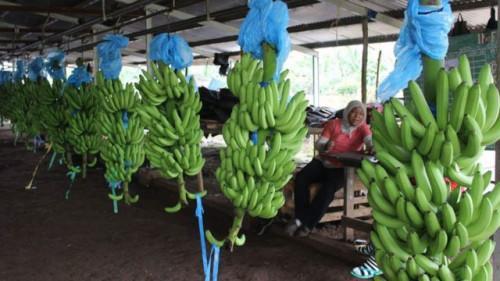 (Business in Cameroon) - In February 2021, banana exporters operating in the Cameroonian market exported 17,258 tons of the product, according to data compiled by the Banana Association of Cameroon (Assobacam). Compared with the 14,965 tons exported in February 2020, this performance is up by 13.28% year-over-year.

This year-over-year rise in banana exports was spurred by the performance of all the three main market players whose data are compiled by the Assobacam. Indeed, the banana exports of Plantations du Haut Penja (PHP), a local subsidiary of the French group Compagnie fruitière de Marseille, rose from 13,847 tons in February 2020 to 14,233 tons in February 2021, representing an increase of 386 tons (+2.71%) between the two periods.

Over the same period, state-owned firm Cameroon Development Corporation (CDC) reclaimed its position as the second-largest producer in that market. In February 2021, the agro-industrial unit exported 1,785 tons of banana while during the same period in 2020, it was absent from the banana exporters’ database since it was the economic victim of the Anglophone crisis that started in 2016. In September 2018, the climate of insecurity prevailing in the anglophone regions due to attacks perpetrated by armed gangs forced it to stop operations in September 2018.

Finally, the exports of  Boh Plantations (which returned to becoming the third-largest operator in the market after CDC resumed operations) increased by 9.8% year-over-year during the period. The company exported 1,240 tons in February 2021 against 1,118 tons in the same period in 2020, representing an increase of 122 tons between the two periods.

Banana is one of the 10 non-oil products most exported by Cameroon to the European Union. According to the latest official figures, in 2019 the country generated XAF136 billion from its banana exports to the European Union. With the decline in exports volumes Cameroon is recording since January 2021, its revenues will likely decline as well even if the decline is recorded during the months of January and February only.