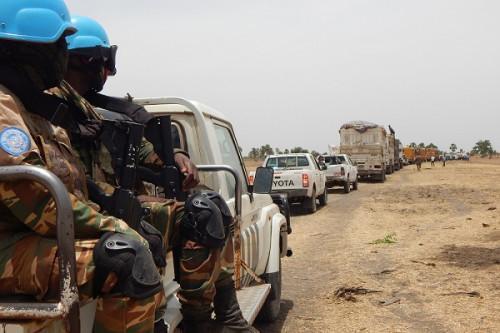 (Business in Cameroon) - On May 1, 2020, Milan Trojanovic, Director of Mission Support, UN Multidimensional Integrated Stabilization Mission in the Central African Republic (MINUSCA), issued a new release in which he implicitly announced that Cameroonian truckers are once again allowed to enter the Central African territory.

This decision, therefore, cancels that of 28 April 2020 by MINUSCA, which prohibited Cameroonian haulers from entering the CAR.

"Due to the emergency caused by the Convid-19 pandemic, as of today, no driver or any other passenger from Cameroon will be allowed to enter the Central African Republic," the MINUSCA announced. At the same time, the UN mission invited Cameroonian haulers to organize their cargo deliveries so that drivers on the Central African Republic side can take over at the border between Cameroon and the CAR to deliver the cargo to Bangui.

According to the May 1 release, only contractors transporting MINUSCA goods were concerned by the April 28 release. The fact that all Cameroonian haulers have been included is just an obvious misunderstanding, Milan Trojanovic explains. Hence, the May 1 release to cancel the previous decision.

"All the issues raised in the decision are null and void," wrote the Director of Mission Support in the May 1 release.

"Concerning the transport of MINUSCA goods, you will comply with the procedures, rules, and regulations in force- agreed bilaterally between the governments of Cameroon and the Central African Republic- for the management of movements of the transport sector across the border. Any modification of the existing procedures will be agreed between the two governments," he continued.

The 1,500 km long Douala (Cameroon)-Bangui (CAR) corridor is served by a little over 5,000 trucks. According to the agreement between the parties, 60% of the carriers would be Cameroonians, and 40% CAR citizens. However, in a study published in 2019, the African Development Bank (AfDB) reveals that only five CAR drivers are active along the corridor. This means that out of the 5,000 drivers who supply the Central African Republic with goods and other commodities, 4,995 are Cameroonians.

According to figures from Cameroonian customs, apart from the logistics of the UN security mission, about XAF55 billion worth of Central African goods transit through Cameroon every year.