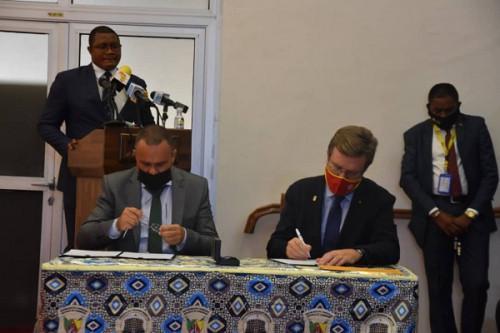 (Business in Cameroon) - In its capacity of executing agency for the reconstruction of the Northwest and Southwest, the UNDP resident representative signed a XAF1 billion agreement with brewing group SABC on November 26, 2021, in Yaoundé.

The agreement was signed under the watchful eyes of Prime Minister Joseph Dion Ngute. Commenting on the signing, Emmanuel de Tailly, CEO of SABC group, explained that the agreement was the materialization of his group’s commitment to its promises.

“Last May 18 [2021], we promised to materialize our support to the NoSo [ed. note: Northwest and Southwest] reconstruction plan with a XAF1 billion contribution despite the difficult and impactful environment (…). We will continue to work towards a return to normalcy in these two regions because political and military solutions are not enough. We think that an economic and social solution is needed as well,” he added.

In the two regions concerned, a separatist crisis has been raging since late October 2016. It started with corporatist demands but quickly turned to a sociopolitical crisis. Since then, have been spreading death and terror causing the destruction of the economic fabric and several basic infrastructures in those regions.

This is the reason why the government elaborate a reconstruction plan estimated at XAF89 billion. The government, international financial partners, and some companies (like the SABC) have decided to contribute to its execution. Meanwhile, for transparency and efficiency, Cameroon chose the UNDP as the reconstruction plan’s executing agent.