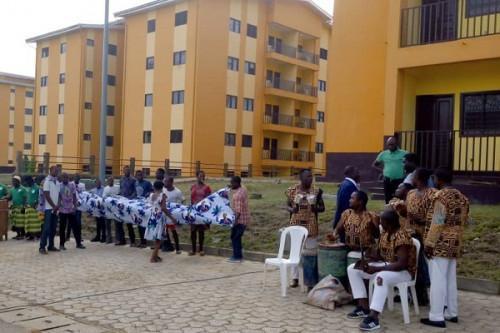 (Business in Cameroon) - Last weekend, Ahmadou Sardaouna, Director-General of Société immobilière du Cameroun (Sic), visited the social housing site of Mbanga Bakoko, a suburb in Douala. This visit falls within the framework of the campaign launched to identify tenants of Sic’s social houses.

At the end of his visit, Ahmadou Sardaouna revealed that more than 50% of those tenants do not have a contract with Sic. "This shows that the state has been plundered by many people. This is why we want the law to be enforced,” he said.

"We met with some subtenants concerned about this irregularity. We worked with them in the framework of the commission set up and validated certain files. We gave others two months to register. Failing that, we will take appropriate legal action to remove them from our homes," he continued.

The tenants, who are accumulating arrears, have, for their part, been asked to pay their debts to avoid the termination of the lease contract and eviction.

Let’s note that the social housing programme launched in Mbanga Bakoko is a 10-year programme to build 56 properties. Currently, only 33 constituted of 660 flats have already been completed.