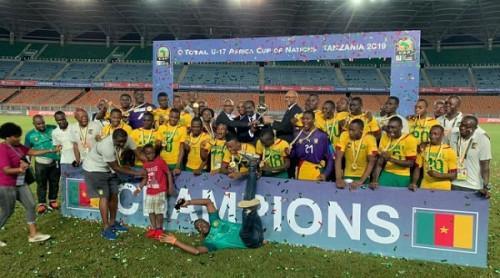 (Business in Cameroon) - Lions Indomptables of Cameroon won the 2019 Under 17 African cup of Nations (U17 AfCON) after beating the Syli national of Guinea on April 28 at the National Stadium in Dar es Salaam, Tanzania.

Winning goal was scored during the penalty-kicks as the match ended 0-0 in normal time. Cameroonian goalkeeper Ekoi stopped the Guinean fourth penalty, kicked by Mohamed Sacko, giving Cameroon the chance to win after Saidou Alioum Moubarak scored the last kick.

The U17 Lions thus scored 5 penalties while their Guinean counterparts only scored 3. Let’s note this is Cameroon’s second U-17 Nations Cup championship title after that of 2003.