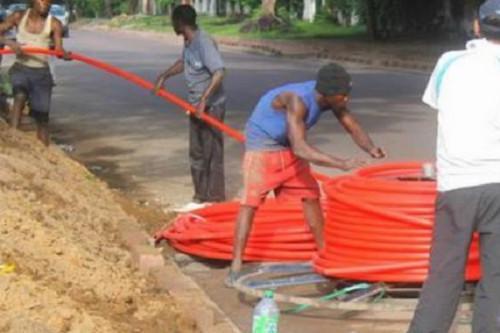 (Business in Cameroon) - With 12,000-km of fiber optics backbone network, Cameroon still has much to do as far as the deployment of that strategic telecom infrastructure is concerned. In an official document, Camtel, the sole manager of the country’s backbone infrastructure, reveals that barely 25% of Cameroon’s 360 main departmental townships have an optical transmission post. Also, it indicates, “there is strong disparity for rural areas.”

"This simply means that only 25% of the administrative units concerned are covered by fibre optics (90 out of 360 in the country, editor's note)," explains a Camtel technician.

“This is the reason the new concession agreements granted to Camtel are so important. Thanks to them, the company can deploy more fiber optics in the country,” he adds.

According to the public telecom company, this extension of the national fibre optics network is all the more essential as the transition to Digital Terrestrial Television (DTT) will "require the use of significant infrastructure and resources, given the expected audiovisual flows."