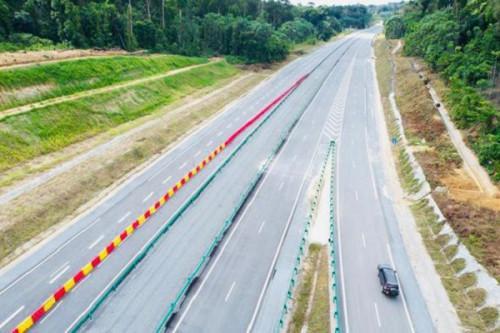 (Business in Cameroon) - The 38 km highway between Kribi and Lolabé, a locality near the deep water port of Kribi, in the southern region of Cameroon, will be officially opened to traffic in the coming weeks. The announcement was made following a recent field visit by the Minister of Public Procurement, Ibrahim Talba Malla, to the seaside town.

The official said the Kribi-Lolabe highway is 100% completed, meaning that this infrastructure of 2x2 lanes, expandable to 2x3 lanes, built based on a reference speed of 110 km/h is only waiting to be put into service. The road was built by the Chinese company CHEC, for a total amount of CFA250 billion. It will allow smoother transport of goods from the deepwater port of Kribi. However, according to experts in port and transport issues, the complete opening up of the Kribi port platform will only take place after the construction of the second section of this road, between Kribi and Edéa, a town opening onto Douala, the country's economic capital.