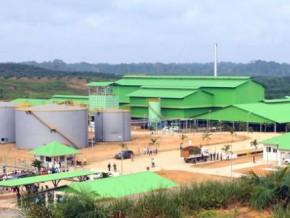 (Business in Cameroon) - The Gabonese palm oil refinery Awala made, on 27 October 2016, its first exports of palm oil and palm kernel oil to Cameroon and Spain, the Gabonese press announced.

The packaging of the cargo of approximately 300 tons of palm oil and 180 tons of palm kernel oil, we learned, was done in the presence of the Minister of Agriculture and Livestock in charge of the “Graine” programme, Yves Fernand Mamfoumbi.

These first Gabonese exports of palm oil are the results of a programme to diversify the economy of this country launched a few years ago by President Ali Bongo, in order to make Gabon less dependent on oil production.

The Awala thus finds in Cameroon an excellent market, since this country presented as the economic engine of the CEMAC zone has been facing, for years, a deficit in terms of palm oil production, a deficit which is officially estimated at about 100,000 tons per year.

This year, for example, the Cameroonian government had to, once again, grants authorisations for preferential imports of close to 60,000 tons to oil refiners, in order to make available the raw material for the production of vegetable oils, soap, etc.