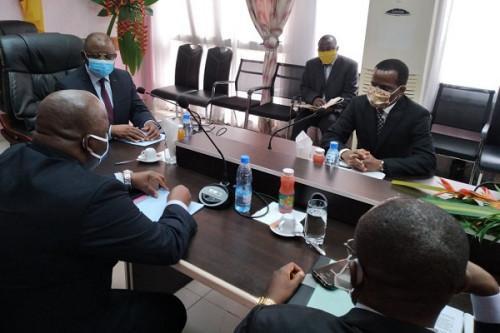 (Business in Cameroon) - Cameroon currently plans to create an export promotion agency to capitalize on the African Continental Free Trade Agreement (AfCFTA) being created. This was revealed during the audience granted by Trade Minister Luc Magloire Mbarga Atangana to Antonio Pedro, Director of the UNECA’s subregional office in Central Africa, on June 25 in Yaoundé.

"It is imperative to revive the major cocoa, coffee, banana, cashew nut, pepper, honey, etc., export channels. The quantities [currently exchanged] are small so, let us set a special plan for cereals, aquaculture, and fish farming based on the sacrosanct principle of economic patriotism. We need to create the Export Promotion Agency (...) since we are entering a new phase and you can't have a trading strategy if you don't solve the supply problem," the official said.

In response to the official’s revelation, Antonio Pedro promised that the UNECA would provide capacity building support to Cameroon in preparation for the commencement of the AfCFTA, whose inception date has been postponed to January 2021 due to the global coronavirus pandemic.

"Because of the Covid-19, capacity building will be part of the activities to be carried out by the UNECA in Cameroon. We are engaged in a collaborative process for the next few years," he said.

The creation of the Export Promotion Agency has been laid down in the investment charter since 2002. To date, however, it is still not operational.

In early 2018, during the annual conference of officials under the Ministry of Economy, Narcisse Ghislain Olinga, the Deputy Director of Trade at the Ministry of Commerce, discussed the urgent need to establish the Export Promotion Agency.

According to him, "this agency should steer, coordinate ... the national foreign trade policy thanks to a considerably far-reaching deployment."

"It would deal with issues related to the financing and the revitalization of our export apparatus ...," he added

The AfCFTA is expected to create a single market of 1.3 billion people on the African continent.